NFL Football is back! Last night would see the annual Hall of Fame game with the Dallas Cowboys battling the Arizona Cardinals in a preseason showdown. This game showed what many fans can expect as the 2017 season nears.

The first quarter would see the start of a possible Arizona victory. Kerwyn Williams would strike first on the board with a five-yard run, putting the Cards up 7-0. The Cardinals offense would not let up as Andre Ellington would extend the lead for Arizona after a five-yard run put the Cards up 13-0.

Another drive.
Another @azcardinals TD!

Arizona would forego a field goal attempt and go for the two-point conversion. Enter Blaine Gabbert, who would get the two-yard run for a successful conversion, putting Arizona further away at 15-0.

Blaine Gabbert keeps it.
And gets the 2-point conversion!@AZCardinals leading 15–0. #AZvsDAL

Dallas would not go into the second with no points. Thanks to a SportsCenter-worthy catch from tight end Rico Gathers the Cowboys were on the board at 15-7.

The only score from the second quarter would come in the form of a field goal putting Dallas only down by five. The momentum for Dallas would continue as the third quarter would see EZ Nwachukwu score thanks to a 14-yard pass, putting Dallas up 17-15. Arizona would answer that touchdown with the boot of Matt Wile, giving them three points from a 40-yard field goal bringing the score to 18-17.

The NFL regular season officially kicks off on September 7. The Kansas City Chiefs will travel to Foxborough to battle the New England Patriots. This game will mark the 2017 premiere of Thursday Night Football on the NFL Network. For more news and updates on the NFL as the season gets closer, follow the league’s official Twitter page. You can also stick with us here at ESPN Gainesville. 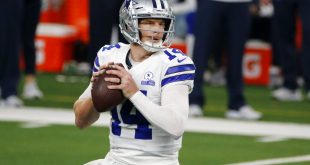