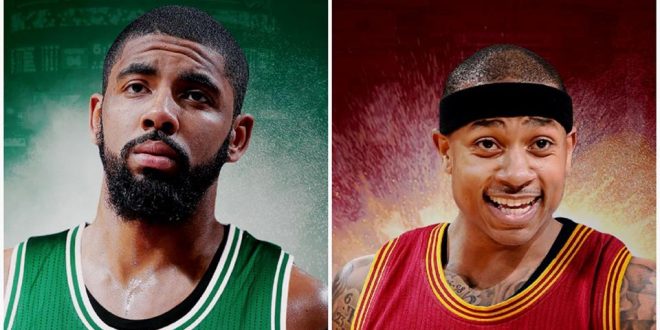 The Boston Celtics and the Cleveland Cavaliers came to a trade agreement August 22, 2017. Two of the biggest names involved were PG Kyrie Irving and PG Isaiah Thomas.

Once Kyrie Irving requested a trade from the Cleveland Cavaliers the team’s downward spiral seemed to hit rock bottom. Last night, Cleveland crossed over and made one of the best moves of the 2017 off-season. In a blockbuster trade, the Cavs lost an All-Star point guard in Irving, but gained one in Boston’s Isaiah Thomas. Cleveland also snagged Jae Crowder, Ante Zizic, and the Brooklyn Net’s 2018 first-round pick in the trade.

All That For Kyrie Irving?

The Cavaliers received tons of offers from teams who wanted Irving. After all, the 25-year old was a first overall pick, Rookie of the Year, a four time All-Star, and a champion. But, he wanted to leave. LeBron James seemed about ready to do the same next year. Cleveland’s disastrous off-season should have put them in a position to take whatever came their way. In the end, the Cavs did make a somewhat unfair trade. But, it was the Boston Celtics who came out with the short end of the stick.

On paper, Cleveland traded the 2011 first overall pick for a last overall pick in that draft. However, Isaiah Thomas proved himself to be the Celtics’ franchise player this season. A 53-point game in the 2017 playoffs solidified that status. For reference, Kyrie Irving’s career-high in a playoff game is 42. But overall, Irving for Thomas would be a pretty even trade. Instead, the Cavaliers made off with a veteran player (Crowder), a 20-year old (Zizic), and a top player for next year’s roster.

The Cavs may be getting the glory right now, but Boston is no loser going into next year. The Celtics got Jayson Tatum in the 2017 Draft. Tatum dazzled the Summer League and was better than expected, even as the third overall pick. During Free Agency, the team also swayed Gordon Hayward away from his own Utah Jazz. Though it’s obvious, Boston also has Irving now. These players alone are enough to give Boston a desired “Big Three”

Is it Enough to Beat LeBron?

One of the most surprising parts about this trade is the rivalry between the Celtics and the Cavaliers. Last season, the Celtics got the first seed in the Eastern Conference. But, Cavs made it to the Finals following a 4-1 series blowout of Boston. It will be interesting to see how the trade plays out in next year. LeBron doesn’t seem too worried.

That's the only way to be to the kid! Special talent/guy! Nothing but respect and what a ride it was our 3 years together Young Gode #Filayy https://t.co/wKYmYsmdgG

One thing is for sure, though. Irving and fans will find out if he is equipped to lead or is better as a sidekick. The Celtics and the Cavaliers will meet for the first time on October 17.

Previous Quarterback Struggles Continue for the Jaguars
Next Who’s Fighting for Those Final MLB Playoff Spots?

Michael Jordan’s “The Last Dance,” ten-part documentary came to a conclusion on Saturday night after …