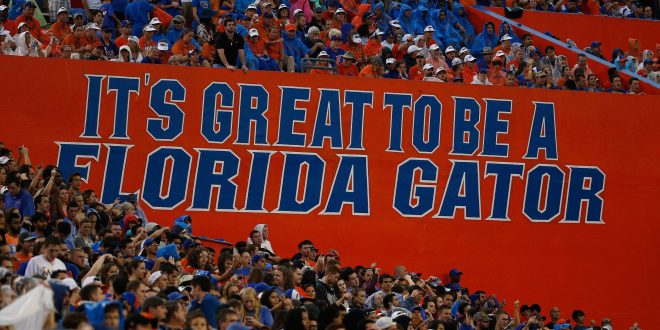 The Florida Gator football team has been a dominant force in the sport since the Steve Spurrier era in the early 1990’s. They have had a winning record in 27 of the past 28 seasons, and this season should not be any different. Eleven Florida Gators are included in the Coaches’ Preseason All-SEC team, which ranks second in the SEC behind Alabama.

Only two Gators, Martez Ivey and Duke Dawson, were first-team selections. This leaves the majority of the Gators residing on the second and third team. Antonio Callaway, Cece Jefferson, Jabari Zuniga, and Johnny Townsend highlight the second team, while DeAndre Goolsby, Jawaan Taylor, Brandon Powell, Chauncey Gardner, and Eddy Pineiro round out the third team.

Martez Ivey is underappreciated because of his position on the offensive line, but there isn’t a more crucial player heading into the season for the Gators than Ivey. The former five-star recruit started 12 of 13 games last season, and now he’s tasked with handling some of the top defensive ends in the SEC. The junior started at left guard for the past two years, but plans on switching back to his natural position of left tackle. This will further his development and could turn him into one of the best offensive lineman in the country.

Duke Dawson considered entering the 2017 NFL draft, but decided another year of experience would work to his advantage. The Cross City, Florida product finished last season with a team-high seven pass breakups, a pick-six, a forced fumble, 24 tackles, and 3.5 tackles for loss. With the loss of Quincy Wilson, Teez Tabor, and Marcus Maye, Dawson is the undisputed captain of this young but talented Gator secondary.

Antonio Callaway is a top receiver in the SEC, but he’s had some major issues staying out of trouble. The 2016 third team All-SEC selection is suspended indefinitely, because he used his student identification card to buy and sell products that he couldn’t originally afford to buy. As a sophomore, Callaway produced 54 catches, 721 yards and four touchdowns. In addition to receiving these second team honors, Callaway is being recognized as a third team preseason All-SEC return specialist. Expect Callaway to be one of the top receivers and returners in the SEC if he can stay out of trouble and on the field.

CeCe Jefferson started six games as a sophomore and totaled 30 tackles, 6.5 tackles for loss, 1.5 sacks, and five quarterback hurries. As a true junior and former five star recruit, Jefferson knows he’s the leader of the defensive line. He played in 26 games during his first two years and was on the SEC All-Freshman team in 2015. Teams will likely focus on shutting him down, which will open up opportunities for his teammates.

One individual that will get many opportunities from teams doubling Cece Jefferson is Jabari Zuniga. As a redshirt freshman, Zuniga totaled 25 tackles, 8.5 tackles for loss, five sacks, 11 quarterback hurries, and a forced fumble. This stellar freshman campaign has NFL scouts salivating over the potential of Zuniga. The sophomore expects to produce another monster year for the Gators.

DeAndre Goolsby has never been a big statistical producer for the Gators, but his impact is undeniable. Last year he recorded 38 catches, 342 yards, and three touchdowns. He has become an excellent blocker over the course of his career at Florida. The new and improved quarterback situation for the Gators could lead to a bigger offensive year for the senior.

Jawaan Taylor could help stabilize an offensive line that has been troublesome for the Gators over the past few years. Taylor was the only freshman on the offensive line last year, and was named to the Freshman All-American team.

Brandon Powell produced 45 catches, 387 yards, and two touchdowns last season. The senior started 11 games last season and should continue to be a relevant part of the offense.

Chauncey Gardner has the potential to be the next star cornerback that Florida produces. He appeared in all 13 games last year as a freshman. Gardner started in the final three contests against Florida State, Alabama, and Iowa. He ended the season with 32 tackles, three interceptions, and three pass break-ups. The Cocoa, Fl product was named the Outback Bowl MVP after recording two interceptions (one pick-six) against Iowa.

Florida has a ton of talent this season, so another trip to the SEC Championship game is definitely within reach. However, it’s tough to expect a trip to the College Football Playoffs with Michigan, Tennessee, LSU, Texas A&M, Georgia, Florida State, and possibly Alabama on the schedule.