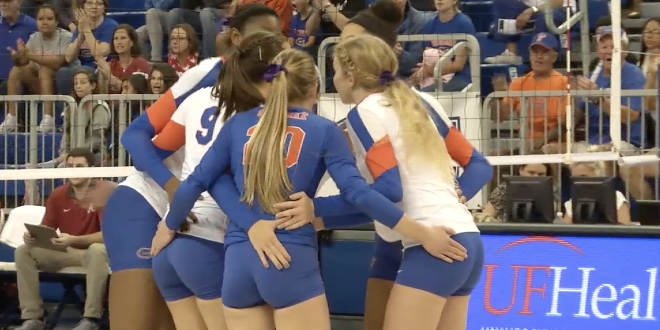 The Florida Gators Volleyball team will host the VERT challenge this weekend. Several big teams are coming to Gainesville, including Texas, Nebraska and Oregon.

On Friday, the Gators will face the Texas Longhorns for their first game, and Texas starts out the season ranked first in the country.

“Opening up against Texas, you couldn’t ask for a better match up, they’re going to fight, and it’s going to be a fun match.” Senior Rhamat Alhassan says.

Last season, the Gators played games in their practice facility, the Lemerand Center. Now the Gators will play under the bright lights and in front of a lot more fans when they open up play on Friday.

This past Saturday, the Gators played an exhibition game against Coastal Carolina. This was also the Gators’ first time to play against another team in the new facility.

“It was awesome being able to play under the lights and getting adjusted. Once everyone got their butterflies out it was fun to see everyone to show what we’ve been working on during preseason.” Senior Allie Monserez said.

After taking on Texas on Friday, the Gators will take on No. 5 Nebraska Saturday evening.

The team as a whole is rebuilding, especially after the departure of All-American and senior Alex Holston, who signed a contract to play professionally in Poland. “Alex is going to be difficult to replace, she was an amazing player and teammate but we’ve been working since January to try and fill that gap.” Senior Carli Snyder said.

The team this year has lots of depth, and options. One new and crucial addition is redshirt freshman Mia Sokolowski, who sat out last season. “It was hard sitting on the bench last year, and not to be able to participate” Sokolowski said.

The Florida volleyball program has been a powerhouse in the SEC and throughout the country, but one thing they haven’t done is win a national title.

Snyder says that the main motivation to win this title is for head Florida Volleyball Coach Mary Wise.

“Every team at the beginning of the year for the past 27 years can say we wanna win this for Mary, shes an amazing leader and a strong woman to look up to.” Snyder said.

The Gators will open up the 2017 Season at the Exactech Arena at the Stephen C. O’Connell center on Friday at 7 PM.