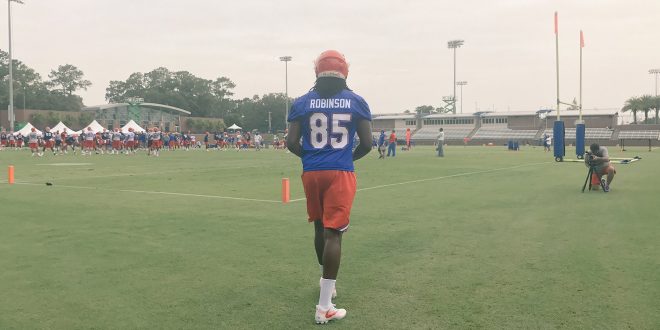 According to published reports, two Florida freshman football players, linebacker Ventrell Miller and wide receiver James Robinson,  were recently cited for marijuana possession. Both athletes were found in possession of the drug at their on-campus apartment on Monday around 12:30 a.m. According to UFPD Public Information Officer Major Brad Barber, officers were called to assist the staff members of the Keys Residence Complex after smelling marijuana.

Officers went to the location of where the smell emanated from, and there they were met by both Miller and Robinson. Barber said both players produced two small bags of marijuana and admitted to their possession. Both Miller and Robinson were issued a notice to appear in court for the offense.

Miller is one of the seven players already suspended for Florida’s season opener against Michigan. These seven players were previously involved in the misuse of university-issued credit cards. Apparently, these athletes used the cards to buy electronics and then sell them for cash.

For Robinson, this is not his first citation for marijuana. In January, Robinson was also cited for marijuana possession during his recruiting visit to Ohio State.

Head Coach Jim McElwain stated that he is aware of the situation and it has been dealt with.

Sydney is a senior studying telecommunications with a specialization in sports media at the University of Florida. She is a multimedia sports reporter for ESPN 98.1 FM/850 AM WRUF and WUFT-TV.
Previous High School Football Preview: Buchholz Bobcats vs. Eastside Rams
Next Florida Basketball SEC Schedule Released