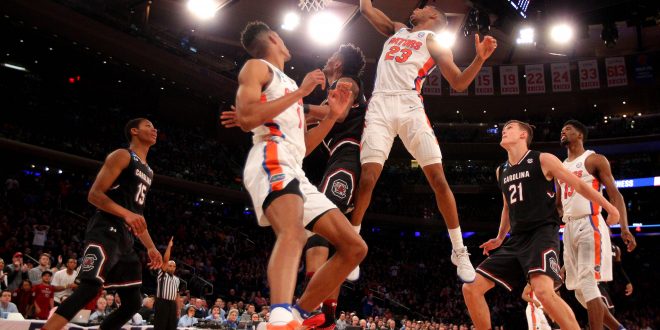 The SEC has released the Gator men’s basketball schedule and Florida opens conference play with a home game against Vanderbilt on December 3o.

What you've been waiting for…the @SEC schedule is here! Can't wait to see everyone there! #OneTeam Tickets: https://t.co/tmFFfXi1lK pic.twitter.com/SNKDmENsIr

Florida will play Arkansas, Auburn, LSU and Mississippi State only at home. Games against Ole Miss, Missouri, Tennessee and Texas A&M will be road games.

The Gators’ will have the chance to face their toughest opponents both at home and on the road:

Five SEC teams went to the NCAA Tournament in March and all of those teams are ready to defend their spots in the tournament. Alabama is added to the list of strong opponents for this season.

The Gators look strong with Chiozza, Allen, Stone and Hayes returning with starting spots. Coming back with a strong set of starters will help Florida stay confident on the court and compete with rising SEC talent.

Most of the SEC games will air on TV. As the games get closer, times and stations will be released.

Season tickets are already on sale and can be purchased here.

Nicolette is a senior at the University of Florida who has participated and enjoys reporting on all things related to sports.
Previous Two Florida Football Players Cited for Marijuana Possession
Next Oak Hall Takes on Florida School for the Deaf Tonight