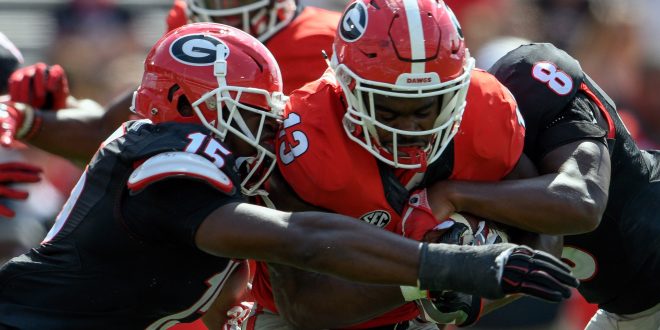 Can Appalachian State Pull Off an Upset Against Georgia?

Football is back and the anticipation is higher than ever! This holds true for Georgia fans as they host their season opener against Appalachian State this Saturday. Georgia is predicted to take home the win, but the Mountaineers are hoping for an upset.

Coming off a 10-3 season and number 1 rank in the Sun Belt Conference, fans have their hopes set high for this upcoming season. In order to pull off the upset the mountaineers have to have a strong running game from the start. Georgia’s defense could make this a difficult task, but the Mountaineers cannot rely solely on field goals. Appalachian State features a strong offensive front and a key player for running back.

In 2016, the Bulldogs had a 8-5 season and finished 2nd in the SEC East. Georgia is looking to improve upon this record going into the 2017 season and potentially finish in the top ten nationally. In terms of this Saturday’s season opener, the Bulldogs are looking to put up points early and improve the passing game. Nick Chubb is no stranger to running the ball and will be put to the test against the Mountaineers defense.

Appalachian State finished ninth in the nation in scoring D and 17th overall. Georgia quarterback Jacob Eason is also looking to create power in the passing game and steer clear from the Mountaineer defense.

Passing is predicted to thrive as long as Eason is out of reach from CB Clifton Duck. For the O-line, it seems to be a work in progress, leaving fans to rely on the Bulldogs’ defense.

This will be a test for both teams and possibly serve as a predictor on how their season will go. Kickoff is set for Saturday night at 6:15.