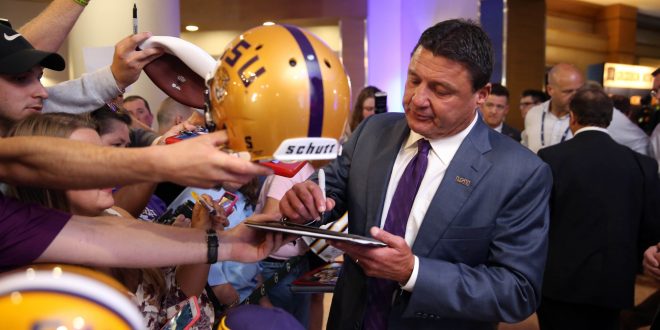 Due to Hurricane Harvey, Saturday’s match-up between the Louisiana State Tigers and the Brigham Young Cougars has been moved from Houston to New Orleans. The game will take place at the Mercedes-Benz Superdome, home of the New Orleans Saints, and will kick-off at 9:30 PM EST on ESPN.

The 2017 Season Trailer is out!
A new season begins on Saturday night. Here come the Tigers! pic.twitter.com/ixAXyBKiwi

After a slightly above average first year for Head Coach Ed Orgeron, where his team finished 8-4 during the 2016-2017 season, Coach O will have to make due with a very different roster this year. The Tigers lost 20 seniors to graduation and 8 players to the NFL Draft, including three 1st-round picks in RB Leonard Fournette, S Jamal Adams and CB Tre’Davious White.

Despite the loss of star running back Leonard Fournette, LSU will more than make do with junior Derrius Guice. Guice impressed last year after he ran for 1,387 yards and 15 touchdowns. At quarterback, the Tigers do return a familiar face in redshirt senior quarterback Danny Etling. The former Purdue-transfer threw for 2,123 yards, 11 touchdowns and 5 interceptions last season.

Along with some new faces on the field, the LSU coaching staff had a bit of a shakeup as well. Matt Canada, who most recently served as Pittsburgh’s offensive coordinator during the 2016-2017 season, was hired by LSU to the same position. Last year, Canada finished as a finalist for the Broyles Award, which is given to the best assistant coach in college football. Canada has also held the position of offensive coordinator with NC State, Wisconsin, Northern Illinois, Indiana and Butler.

Winning In the Trenches

Depsite the fact that the Tigers lost center Ethan Pocic, who ended last season as a Rimington Award finalist (Best Center in the NCAA), LSU is determined to continue their strong offensive line play into this season. Saturday Down South ranked LSU as having the 2nd best offensive line in the SEC. A strong running game has long been the foundation of Louisiana State football, and the narrative is bound to continue this season.

If you thought LSU lost a good chunk of their upperclassmen, Lee Corso would tell you, “Not so fast!” BYU graduated 40 seniors from last season and 1 player (Jamaal Williams) to the 2017 NFL Draft. The Cougars have lost their leading rusher and top three wide receivers, in terms of receiving yards, from last season. The only major offensive factor returning for BYU this season is starting quarterback, junior Tanner Mangum.

Below are highlights from Ed Orgeron’s press conference on the weekly SEC Teleconference from this week.

To The People of Texas… We Stand With You.
The Tigers will be playing for you on Saturday night pic.twitter.com/yau829RH7d

Previous NFL Teams Gear Up For Final Preseason Games
Next Can Appalachian State Pull Off an Upset Against Georgia?