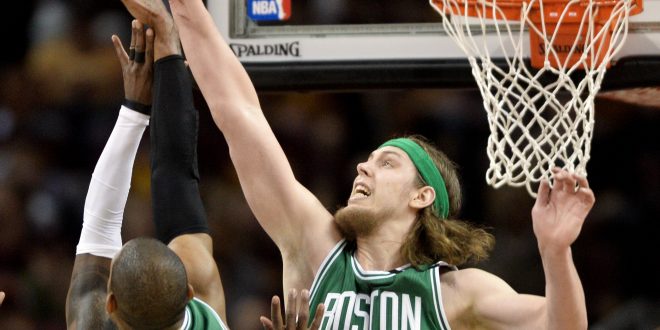 May 23, 2017; Cleveland, OH, USA; Boston Celtics center Kelly Olynyk (41) deflects the ball on a rebound during the first half in game four of the Eastern conference finals of the NBA Playoffs at Quicken Loans Arena. Mandatory Credit: Ken Blaze-USA TODAY Sports

New Look And The Boston Celtics Aren’t Looking Back

After the media theatrics of last week’s blockbuster Cleveland-Boston trade, the debris has settled and NBA history appears to be repeating itself.

Talks of a potential Irving trade began approximately a month ago, when rumors were confirmed Irving had requested a trade from Cleveland–Mostly due to his displeasure with his role in the offense. Irving wanted to be a focal point, but saw no possibility sharing the ball with Lebron James. He felt the trade was necessary, but thanked Cleveland in an interview for their five years of support.

The trade came as a surprise to many around the league; especially considering the fresh wounds from the recent Boston-Cleveland conference championship series. President Danny Ainge’s attempt to assemble a third “Big 3” is underway in Boston. The Celtics are already the most decorated team in history with 17 championships, they own a staggering 25% of total championships.

Previous Boston trades have reshaped the entire landscape of the NBA. In 1980, Boston traded for Kevin McHale and Robert Parish to play along side Larry Bird. 3 Hall of Famers on one squad proved to be the most lopsided trade in history. The next era of the Boston Big 3 came when Ainge traded a king’s ransom for Kevin Garnett in 2008. The combination of Garnett, Ray Allen, and Paul Pierce was enough to win the 08′ Finals.

The Celtics now pair Irving with former Florida Gator legend Al Horford also the newly acquired forward Gordon Hayward. One concerning factor for Boston is the total roster turnover. Although they acquired big name all-stars this offseason they lost a lot of pieces that made them great last year. Important defenders and weapons exited via trade and free agency include difference makers such as: Kelly Olynk, Avery Bradley, Jae Crowder, and Isiah Thomas. Brad Stevens carefully constructed a roster that worked near perfectly chemistry wise in 2017. The Celtic’s defense was solid night in and night out largely because of the careful consideration of play types.

Boston will send its 2020 second-round pick via Miami to Cavaliers to complete the trade, league sources said. Boston would budge no more.

We will have to wait until October to see how the trades affected their prospective teams. Fortunately NBA fans won’t have to wait long, the Celtics open their season in Cleveland October 17th.