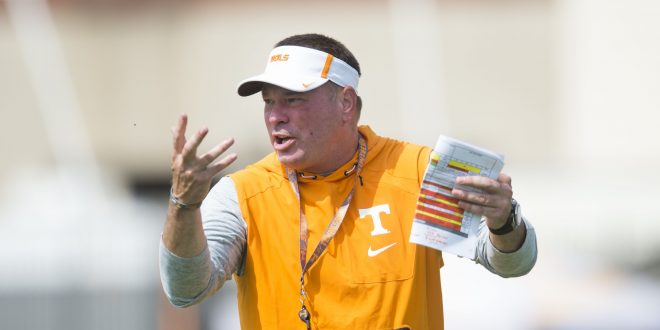 The 25th ranked Volunteers will start their season in a Monday night SEC-ACC matchup against Georgia Tech.

Who Will Be the Tennessee Starting QB?

What About Georgia Tech’s Quarterback?

For Georgia Tech, the QB battle is between four players. The Yellow Jackets’ depth chart lists juniors Matthew Jordan and TaQuon Marshall and redshirt freshmen Lucas Johnson and Jay Jones all with an equal chance of being the starting quarterback Monday night. Just like Butch Jones, Georgia Tech head coach Paul Johnson is in no rush to announce a starter. When asked who the starter would be, Johnson said “I think I could call the game for any of them. We’ve tried to highlight what each of them do and go from there, and that’s why I’m not in any big hurry to tell everybody who it is. We may play all four of them in the first game. Who knows?”

Matchups to Look For

Here are some matchups that will make or break tonight’s game.

Even without knowing who will be under center for the Yellow Jackets, we know that they will run the ball and likely be successful at it. Their triple-option offense is tough to stop for any defense, but it may be especially tough for Tennessee. Last season, Tennessee allowed nine runs from scrimmage of at least 40 yards – eight in the last eight games of the season – and six carries of at least 60 yards. They saw their run defense get taken advantage of over and over last season. In Georgia Tech can run the ball like they are capable of and the Tennessee defense hasn’t improved from last season, it could end up being a long night for the Volunteers.

Going against the Georgia Tech Defense

The Tennessee offense should still have the advantage in this game, but the Georgia Tech defense should not be ignored. The Yellow Jackets play a physical style of defense. They have several returning veterans who are looking to build on last year’s successful 9-4 season. Butch Jones had some comments about Georgia Tech’s defense, mentioning how talented the Yellow Jackets are on defense and that they follow the same format for winning on defense as they do on offense.

Tennessee and Georgia Tech kicks off tonight at 8 p.m. in Mercedes Benz Stadium in Atlanta. You can watch the intriguing matchup on ESPN.