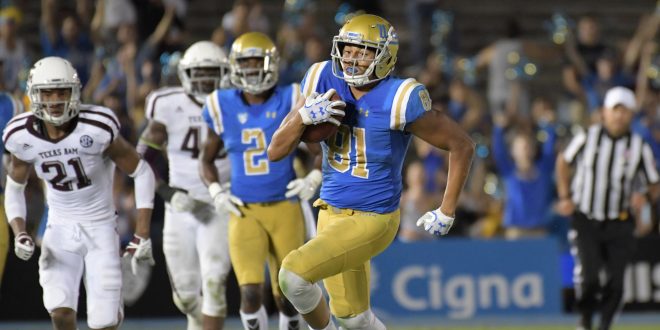 We’re two and a half quarters in and Texas A&M holds a 44-10 lead over the UCLA Bruins.

It’s the end of the third and UCLA’s Josh Rosen drives the ball to Soso Jamabo. Touchdown.

In the fourth, Rosen passed to Darren Andrews twice and the score is 44-31. But, none of that matters with 40 seconds left in the game.  Then, Rosen throws to Jordan Lasley for a TOUCHDOWN!

The Bruins overcame a 35-point deficit to win the game. While this may be great for their fans, Aggie fans are at a loss.

There truly are no words to describe what just happened. None. Josh Rosen just did that. Heisman. @josh3rosen pic.twitter.com/2CdZ1FRzXT

Junior Josh Rosen had a breakout first season, throwing for 3670 yards and making 23 touchdowns. However, his sophomore year was lackluster. He threw for less than 2000 yards and only scored 10 touchdowns.

As is a trend for many quarterbacks, Rosen’s expectations were even lower this season. Instead, he threw for 491 yards in one game and helped make four touchdowns in 20 minutes. Nobody expected that. Not before the game, not before the three sacks on Rosen, and definitely not after halftime.

But, once he got going, Josh Rosen could not and would not stop. Solid drives dotted the rest of the game until the score was 44-38. Then, Rosen faked a spike 10 yards away…

Josh Rosen brings UCLA back all the way from 44-10 to take a 45-44 lead. Get ready for this guy on Sunday's! pic.twitter.com/kvXGGC4kiN

…and the rest is history.

In this particular game, Texas A&M played 11 true freshmen and started two of them. The first time on a college field can, unfortunately, be enough to scare an 18-year-old into a below-par performance.

Fear and a flashy first half are two large factors that could have contributed to the loss. Again, the first time on a college field is just different. High school games last about the length of a college first half. Consequently, after that is when the Aggies started to dim.

The freshmen could play well during next week’s game against Nicholls. But against UCLA, they cracked under pressure.

UCLA is 1-0 heading into next week’s home game against Hawaii.

Texas  A&M has a cupcake game against Nicholls next week. But, they will still have to work hard and move on from their first loss. If not, they will start to fall behind in the world of college football.