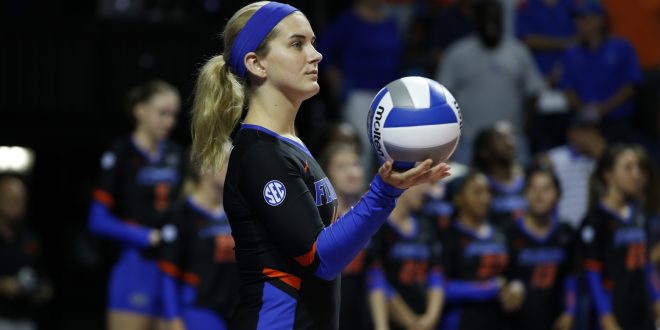 After a thrilling opening weekend that saw the Florida Gator volleyball team take down first-ranked Texas and fifth-ranked Nebraska, the team traveled to San Juan, Puerto Rico to take part in the SEC-ACC Challenge. They improved their winning streak to four by defeating NC State on Saturday and 16th-ranked North Carolina on Sunday.

Florida took down NC State with ease, winning by a score of 25-17, 25-16, and 25-22. Carli Snyder led the team with 15.5 points, including a match-high 14 kills. Three-time All-American Rhamat Alhassan was nearly flawless on the attack, posting nine kills in 12 attempts. Caroline Knop also paced the Gator defense with 17 digs. Melissa Evans led the Wolfpack with 11.5 points on 11 kills.

The match against North Carolina posed as another minimal challenge for the Gators, who defeated the Tarheels by a score of 25-17, 25-17, and 25-23. Three Gators, Carli Snyder, Rachael Kramer, and Rhamat Alhassan, all recorded over 10.0 points in the match. Snyder once again led the team with 12.0 points on 11 kills, however, on an inefficient 33 attempts and seven errors. Kramer totaled 10 kills on 14 attempts for a .571 kill percentage. Taylor Leath led the Tarheels with eight kills and nine points.

Florida Gator head coach Mary Wise noted it was impressive that her team figured out a way to finish the match, even with North Carolina’s near error-free third set. “North Carolina was error-free, so you’ve got to create points. We did it with the blocking and with the defense.”

The Gators will host the Active Ankle Challenge next weekend on September 8th and 9th. They start off the tournament by taking on UNC Greensboro on Friday, September 8th at 12:00 pm. They then go on to face American on Friday night at 7:00 pm. The Gators conclude the tournament with No. 23 Michigan State on Saturday at 4:30 pm. Florida plays their next seven matches at home and is favored to win in every one, so being undefeated heading into their SEC opener against Arkansas is certainly obtainable.