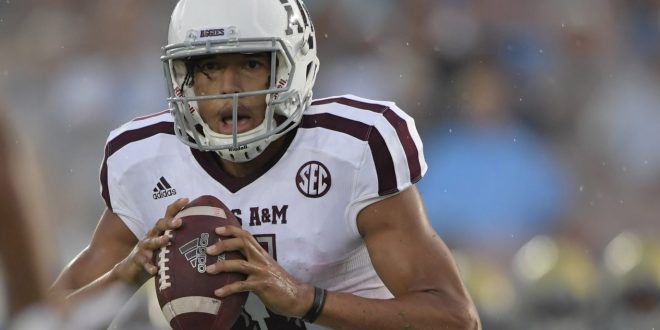 Nick Starkel entered College Station, TX as a three-star recruit from Liberty Christain High School.  After a heated battle during the offseason, true freshman Starkel was announced as the starting quarterback for Texas A&M.  However, in the third quarter, Starkel was rolling out to the left breaking his left ankle.  Starkel completed 6 of 13 passes for 62 yards,  leaving Texas A&M with a comfortable 38-10 lead. According to Sumlin, Starkel will be out for a long time.

Enters true freshman Kellen Mond who proved to be rather ineffective during the game.  Mond completed 3 of 17 passes for 27 yards and ran for a grand total of 54 on 15 carries.  He adds a different dynamic to the game with his ability to run but had little success against the Bruins. With Mond under center, the offense had a noticeable difference in its ability to move the ball only gaining 125 yards in six possessions.

The Aggies will luckily have a couple of easy games coming to College Station, TX that will give Mond time to develop.  Mond will be facing Nicholas State Colonels and the University of Louisiana Lafayette Ragin’ Cajuns in the next two weeks.  Though not all is lost, the last time Texas A&M lost a season opener, they went to the Cotton Bowl led by redshirt freshman Heisman winner Johnny Manziel.  Who knows Mond may lead the Aggies to the same level of success.