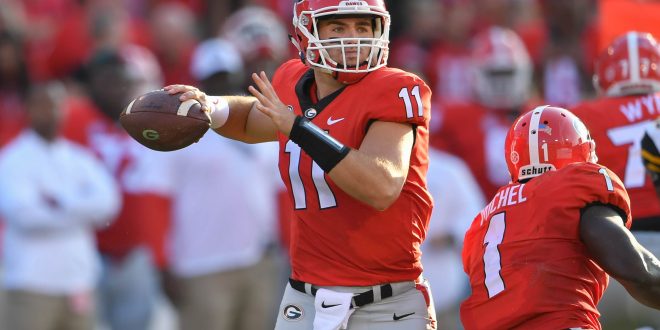 Quarterback Jacob Eason was one of the most highly touted recruits to come out of high school in recent memory. After a solid 2016 freshman campaign in which he threw for over 2,400 yards, 16 touchdowns and eight interceptions on 55 percent passing, Eason seemed poised to take the next step his sophomore year at Georgia.

However, in Georgia’s first game this season against Appalachian State, Eason injured his knee and was forced to be out of the game. Fortunately for him, the injury did not appear to be too serious.

“He was down a little bit, but he’ll be back from it,” Georgia head coach Kirby Smart said.

With Eason out of the game, this allowed former four-star recruit Jake Fromm to seize the moment and he did not disappoint. In his very first college game, the freshman quarterback threw for 143 yards on 10/15 passing with one touchdown pass and zero interceptions. With Eason expected to miss the Notre Dame game this Saturday with a sprained knee, this allows Fromm to build off his solid debut.

Not a bad start to the career for Jake Fromm thus far. His first career TD pass in red and black goes to Javon Wims. #UGA pic.twitter.com/1q4Tzc3TSi

Who is Jake Fromm?

As mentioned before, Fromm is a former four-star recruit. According to 247sports, he was the 44th overall player and third-ranked pro-style quarterback in high school. Fromm had a very productive high school career, throwing for 12,745 yards, 116 touchdowns and 25 interceptions on 61 percent passing. He was also dangerous on the ground, rushing for a career 594 yards and seven touchdowns. In his senior year, he averaged 35 rushing yards per game.

Where does Georgia go from here?

While Eason is expected to not be out for the whole season, this does give Smart a dilemma. On one hand, Eason was a top-five recruit coming out of high school and might have a higher ceiling. On the other hand, if Fromm has another solid game against Notre Dame, Smart could elect to go with him for the rest of the season as he would be considered the hot hand. The good news about having a quarterback competition for the Bulldogs is that they have two starting caliber quarterbacks. The bad news is that only one of them can start. Whatever happens, Smart is excited for his team to play Notre Dame this Saturday.

“We’re the first team ever from Georgia to go to South Bend and play, and we’re excited for that opportunity,” Smart said.

Outlook for the rest of the season

After the Bulldogs takes on the Fighting Irish this Saturday, they will face Samford before finally getting its first SEC game against Mississippi State.