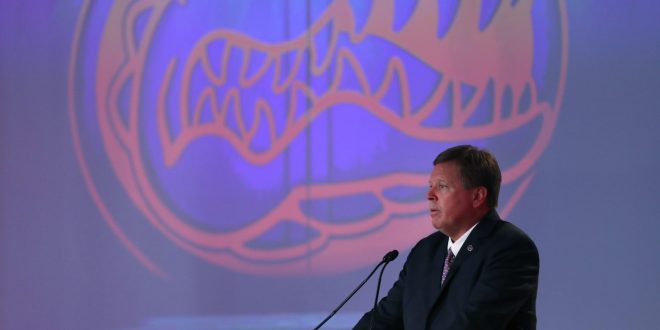 Florida’s game vs. Northern Colorado is officially rescheduled to 12 p.m. on Saturday, due to Hurricane Irma’s impending effects on the state of Florida. The new game time is meant to accommodate the storm and safety of both Florida residents and the visiting Northern Colorado football team.

Here is the latest forecast track on #Irma pic.twitter.com/5rgaRH8xzw

Scott Stricklin announced on Wednesday afternoon that the game would be moved from its original start time at 7:30 p.m. to 12 p.m. The contest was originally supposed to air on the SEC Network, but will now only be available via stream. The game can be seen on Watch ESPN, SEC Network + and the ESPN app. Northern Colorado-Florida can also be heard on the IMG Gator Sports Radio Network all throughout the state.

“We have worked closely with campus and regional authorities during the last 48 hours to find the best possible solution that allows us to play the game and takes into account the safety of our fans, players, staff and personnel working the game,” said Athletics Director Scott Stricklin. “With tropical conditions possible expected in our region on Saturday night or Sunday morning, moving the game from 7:30 to Noon, it’ll give people a chance to come to the game and return home before any expected weather or effects hit our area.”

The University of Florida also announced that there will be no overnight parking available on campus Saturday evening following the game. Along with Florida football’s time change, the soccer team’s match on Sunday night with South Florida is cancelled as well. The Gators’ cross country team will now travel to Jacksonville for the North Florida invitational as the meet has been moved to Thursday afternoon.

ESPN Gainesville, ESPN 98.1 FM and 850 AM WRUF will stay updated throughout the day to provide further information on upcoming Florida Gators sporting events that coincide with Hurricane Irma.

Hurricane Irma is now one of the most powerful Atlantic storms ever recorded. Live updates on its path https://t.co/rqI0kBDoTQ pic.twitter.com/gK8OHL5Dlf