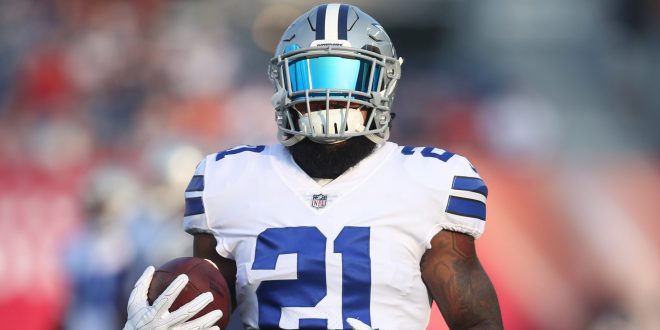 Yesterday, an independent arbitrator upheld Dallas Cowboys running back Ezekiel Elliott’s six game suspension. However, Elliott is eligible to play in the Cowboys’ opener Sunday against the New York Giants. Elliott’s suspension will begin Week 2. He will return to the team Week 9. The reason for Elliot’s suspension is that Elliott violated the league’s personal conduct policy in August. The suspension stems from multiple alleged incidents of domestic violence against his ex-girlfriend.

Ezekiel Elliott 6 game suspension has been upheld by Harold Henderson, per source

Why is Elliott Playing Week 1?

In a statement released by the NFL, the absence of arbitrator Harold Henderson from the beginning of the hearing factored into the delayed decision. The judge wanted as much time as possible to review all legal issues. The judge asked the NFL counsel if they would allow Elliott to play as he waited on the decision. Both sides agreed, allowing Elliott to start the season on the active roster. Many may view Elliott delaying his suspension as a small win for Elliott. However, Elliott’s team thinks otherwise. They view the decision as an inability by the arbitrator to sort through league politics. Also, the statement accuses the NFL of conspiring against Elliott. Elliot’s  legal team are preparing to take the case to a federal level.

During the trials and on-going speculation regarding Elliott’s status, the uncertainty regarding loomed large over the Cowboys all summer. Cowboys Head Coach Jason Garrett is impressed the way his team and Elliott prepared for Week 1. Now that their Pro Bowl running back is clear to play, the Cowboys should be ecstatic to have Elliott in the backfield Sunday. The reason for the uncertainty comes from the uncertainty in the performance of Elliott’s replacements. Darren McFadden and Alfred Morris aren’t what they use to be. For a huge divisional game to start the season, the Cowboys want all hands on deck, with Elliott in the backfield.

After all the trials and off the field distractions, Ezekiel Elliott and the Dallas Cowboys will host the New York Giants in the season opener. This is the third year in a row these two rivals will start the season in Dallas. Kickoff from AT&T Stadium is set for 8:30 p.m.

Previous Gator Games Could Be Moved Due to Hurricane Irma
Next Northern Colorado-Florida Kickoff Moved to 12 P.M.