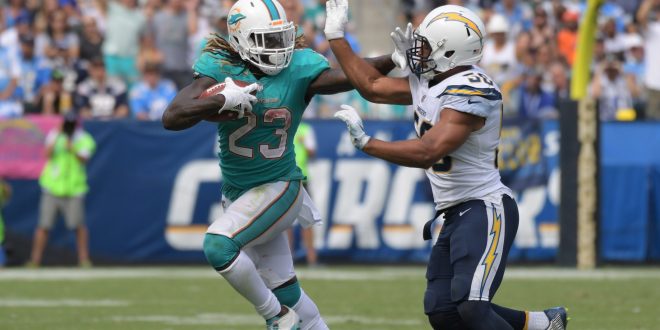 After a hurricane forced the Dolphins to postpone their season opener last week, the team traveled to LA to start their season against the Chargers where they pulled off a 19-17 win.

For the Miami Dolphins, all eyes were on quarterback Jay Cutler as he made his debut with the Dolphins. After Ryan Tannehill went down with an injury in training camp, Cutler decided to postpone retirement and sign with the team. The 34-year-old quarterback only played in five games in the 2016 season, so many didn’t know what to expect from Cutler this season. In his first start as a Miami Dolphin, Jay Cutler produced. He completed 24 of 33 passes for 230 yards and one touchdown. He didn’t put up a spectacular performance, but he played well and made very few mistakes. Most importantly, he led the Phins to a win. After the victory, Cutler was happy to be playing the game of football and shared his thoughts on the Dolphins’ locker room environment.

Miami held Los Angeles to just 17 points, but the team played relatively poorly on defense. Philip Rivers was moving the ball up and down the field with ease, exposing the Dolphins’ pass defense. Rivers threw for 331 yards and a touchdown and completed almost 80 percent of his passes. There seemed to be an open Charger receiver on far too many plays. While the team’s pass defense put up a poor performance, the Dolphins’ run defense looked stout. The Chargers were held to just 44 total rushing yards on 14 carries, and star running back Melvin Gordon had only 13 rushing yards on nine attempts.

Miami needed their play-makers to have good outings, and they did just that. Jay Ajayi and Jarvis Landry carried the Dolphins’ offense and played huge roles in the win. Ajayi had 28 rushes for 122 yards and Landry caught 13 passes for 78 yards. Landry, who was targeted 15 times in the game, seems to be Miami’s leader on offense. Whenever Miami needed offensive production, Landry and Ajayi were the first two options. If these two play like this all year, the Dolphins could be looking at a very successful season.

The Dolphins got an important first win on Sunday. They weren’t perfect, but if there is one thing we’ve seen from Miami under coach Adam Gase is that the team knows how to pull out wins. After the game, Gase shared his thoughts on the team playing together and winning for South Florida.

The Dolphins will travel to New York to face the Jets next Sunday at 1 P.M ET.