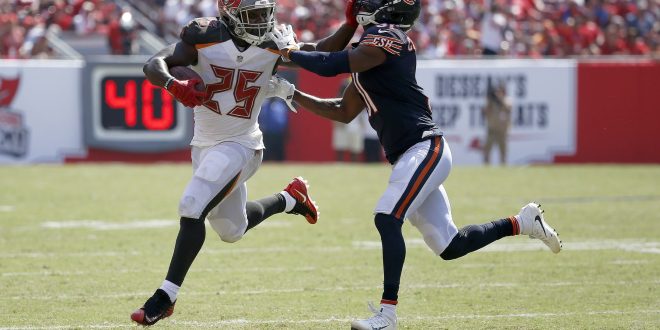 Tampa Bay Bucs Show Out in Opener Against Chicago Bears

The Tampa Bay Bucs missed out on their first week due to Hurricane Irma. However, the team didn’t miss a beat on Sunday. Tampa Bay hosted the Chicago Bears and nearly shut them out, finishing with a score of 29-7.

Chicago’s only points came from a touchdown in the last two minutes of the game. But, the Buccaneers had a stellar game. Especially the first half. They scored 10 points in the first half and sixteen in the second.

In fact, the Bucs played such a good game, some are even referring to them as Super Bowl contenders.

This is Tampa Bay’s third season with quarterback Jameis Winston. Winston has put the Bucs on an upward trend since his 2015 rookie season. But, an upward trend from a 2-14 season is hardly a feat. It’s the strength of the trends that solidifies his status. Last season, he almost led them to the playoffs. This season, it would be a shock if he didn’t. Winston threw for 204 yards and a touchdown. Any nerves from the past two seasons melted away and Winston made an impact from the first quarter. He and Bucs’ No. 1 wide receiver Mike Evans completed this pass at the end of the first.

Besides his playing ability, the former FSU star is coming into his own as a leader. Listen to what he had to say about how the Bucs came into the game.

Maturity was one of Winston’s biggest issues for the Bucs. Now, the 23-year old is making headlines for much more.

The Bucs Defense is Top-Notch

Tampa Bay’s defense looked unstoppable against the Bears. They finished the day with a sack, two fumble recoveries, two interceptions, with one that was returned for a touchdown. With the exception of a few guys, the Bucs have a pretty shaky offense. But, the defense does its job well.

Open holes typically dot the Bucs on the field. On Sunday, they were nonexistent. Former Gator Vernon Hargreaves defended stronger than his age would suggest. Having young guys playing at a high skill level is what the Bucs lacked for years.

The Chicago Bears offense has struggled as of late, primarily due to injuries to their receiving core, with Cameron Meredith and Kevin White already out for the season due to an ACL tear and broken scapula respectively. Tampa Bay’s quick feet and strong arms made Chicago look like a college team. This was even more impressive considering that this is only Tampa Bay’s first game of the season

In the end, Tampa Bay dominated the Bears on both sides of the ball. Again, the Bears may not be the Patriots, but they sure did scare Atlanta last week. Next week, the Bucs will travel to Minnesota to face the Vikings. Jameis Winston will be on the field against his former teammate Dalvin Cook, who is averaging 5.5 yards per carry. Tampa Bay is 1-0. Minnesota is 1-1.

The Tampa Bay Lightning have continued their success from 2020 into 2021. The Lightning are …