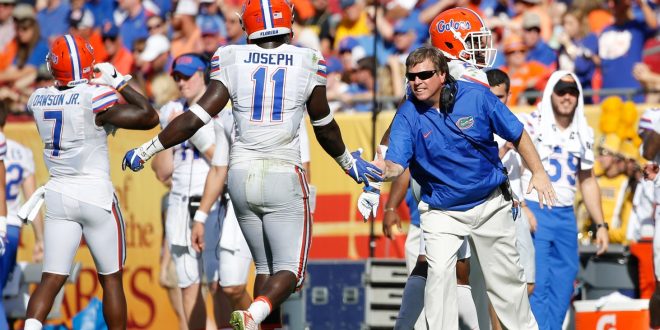 Sophomore linebacker Vosean Joseph is looking to make his mark on the team again this year.

Last year, Joseph made his mark on “Gator Nation” with his huge hit on Danny Etling against LSU. Now, one of Florida’s starting line backers Joseph will look to be a key playmaker throughout this season and the upcoming years.

The Florida Gators head into this week’s match up with a 30 year streak over the Wildcats. While Kentucky is coming off of a win over South Carolina, Vosean said the team is ready to face the wildcats and their mobile quarterback. Joesph also said the team is not focusing on the win streak, but simply the game ahead.

Thoughts on the Defense:

Florida’s defense was on the field for about twenty minutes, during Saturdays game against Tennessee.

Defensive Coordinator Randy Shannon felt as if his defense was wearing down due to missed tackles, however Joesph would disagree. Vosean is confident in his team especially in linebacker Jeremiah Moon. Joseph says Moon is a key playmaker who can preform well in any situation.

Joesph also gives credit to the freshmen for being ready and stepping up when needed. He said freshmen like Marco Wilson have done their job studying the playbook and knowing their stuff.

Joseph and the Gators hit the road this weekend to take on Kentucky. Kick of is set for 7:30 P.M and will be aired on SECN.