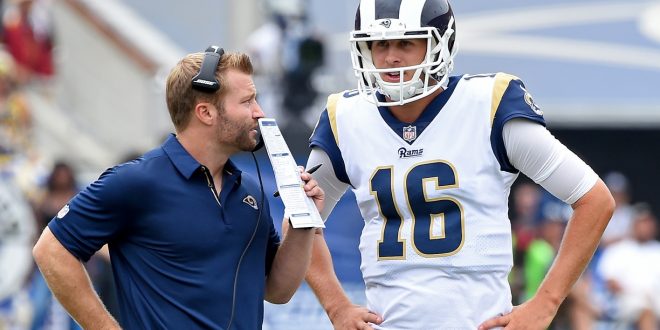 Week three of the NFL season will kickoff on Thursday night as the Los Angeles Rams square-off against the San Francisco 49ers in a California clash.

The Rams (1-1) began the season with a dominating 46-9 win over the Indianapolis Colts on opening weekend. However, the team would fall 27-20 against the Washington Redskins on Sunday. Third-year running back Todd Gurley rushed for 88 yards, while adding both rushing and receiving touchdowns in the loss. Meanwhile, quarterback Jared Goff threw for 224 yards, one touchdown and an interception.

All eyes this season will be centered around the former number one overall pick. In his first year with the team, Goff appeared in just seven games, throwing for 1,089 yards, five touchdowns and seven interceptions. The organization and its fans hope to see major improvement as the season progresses.

The 49ers (0-2) have struggled mightily thus far, particularly on offense. Following a 23-3 loss against the Panthers in week one, the team would fall 12-9 in a close game against the Seattle Seahawks on Sunday. With two weeks in the books, the team is yet to score a touchdown.

Quarterback Brian Hoyer has consistently struggled this season, passing for 292 yards and two interceptions. On a positive note, running back Carlos Hyde has been a steady contributor. Hyde has rushed for 169 yards in two games this season, including this 61-yard run on Sunday.

Carlos Hyde with the biggest offensive play of the day for 61 yards. #49ers pic.twitter.com/5WGCP5FeJE

Kickoff is set for 8:25 p.m. ET at Levi’s Stadium on Thursday night and can be viewed on the NFL Network.

Matthew is currently a senior, majoring in telecommunications with a minor in business administration.
@matt_levay
Previous MLB’s Home Run Record Broken in 2017
Next USF-Temple: A Battle Between Two Former UF Coaches