The Wolves of St. Francis Catholic and the Bronson Eagles face off this week. The Wolves will look to continue their three game win streak against a Bronson team that is struggling to get their first win.

Saint Francis is coming off a 46-17 road win at Rocky Bayou Christian in Niceville, FL. Senior quarterback Nick Baskin has taken charge and is leading his team on the offensive side. St. Francis Head Coach Scott McDaniel said that Baskins is basically doing what he wants to do, when he wants to do it on the field. He also said that Baskins can do a little bit of everything.

In just three games Baskins has 24 completions on 36 pass attempts for a total of 634 yards. Baskin could possibly have his way again on Friday night. Bronson is coming off of a 41-7 loss to Oak Hall. In their two games played this season, the Eagles have allowed 40 or more points. In addition, coach McDaniel said that his team has been able to score with ease because of his players speed.

Despite a strong start and remaining undefeated, coach McDaniel said that on the defensive side, his team is still figuring some things out. Many of his players are dual athletes and football is not their first sport. He said that he has seen that lack of experience result in many missed tackles.  McDaniel said that as the season goes on, he expects the defense to have big improvements.

Kickoff from St. Francis High School is set for 7 PM on Friday. 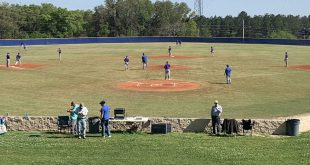