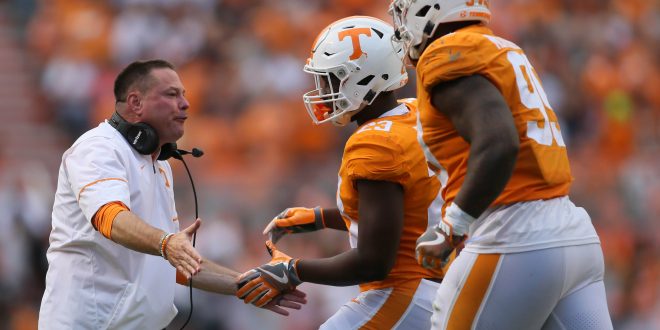 Florida defeated Tennessee just last weekend. Now it’s time for the Volunteers to move on and get ready to go up against UMass this Saturday at noon. After the loss, the Vols moved down to No. 37 in the NCAA rankings.

Moving On From Florida

It was the play that left Gator fans in shock, the play that gave the team a win. Tennessee’s loss to Florida came via Feleipe Franks throwing a 63-yard touchdown pass to Tyrie Cleveland in the expiring seconds of the game.

However, for Tennessee and head coach Butch Jones, it’s time to look ahead and prepare for their upcoming game. Coach Jones says his team needs to push forward and keep working hard.

"We are a mature enough team to look towards the next week… We've got to play well on Saturday." – Kendal Vickershttps://t.co/sAkYkivWfk

Even after missing 3 of the attempted field goals in last week’s matchup with Florida, Coach Jones still believes that his kickers will prove themselves against the Minutemen.

Tennessee quarterback Quinten Dormady ranks fourth in the SEC with 207.5 passing yards per game. And wide receiver Marquez Callaway ranks seventh nationally and second in the SEC in yards per reception.

This season, the Minutemen have four players that reached high achievements on the field. Quarterback Andrew Ford has a total of 3,000 career passing yards. Wide receiver Andy Isabella and tight end Adam Breneman have both surpassed 1,000 career receiving yards. On the ground, running back Marquis Young passed 1,000 rushing yards as well.

After taking on UMass, the Volunteers will host the Georgia Bulldogs next Saturday at 3:30 p.m. Meanwhile, the Minutemen will head back to Massachusetts and take on Ohio at 3:30 p.m. as well.