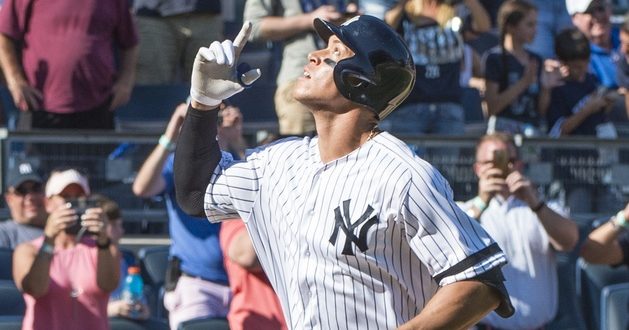 Babe Ruth, Mickey Mantle, Roger Maris, Alex Rodriguez… Aaron Judge. The 25 year old joins one of the most prestigious lists in all of baseball: New York Yankees players to hit at least 50 homeruns in a single season. However, only Judge has achieved the feat as a rookie.

Time to edit the history books!#AllRise for Aaron Judge – the new record holder for most HR by a rookie! pic.twitter.com/KuE2otXn7B

Unless you’re the type of sports fan who turns off the television the second you see a clay diamond; this isn’t the first you’ve heard of the new Yankee’s star Aaron Judge. Not only does the 6’7″ 280 lb. behemoth look great in pinstripes; he plays great too. After spending his first few years in the minors rehabilitating various injuries Judge was called up to be the 2017 day 1 starter in right field, and oh-boy, Yankees fans are rejoicing.

He homered in his first at bat. This was the start to a decorated season of 3 American League Rookie of the Month Awards (April, May, and June) as well as an American League Player of the Month Award in June. His stats are easier to gain a perspective on when considering weighted runs created (minimum 500 at bats). His rookie year wRC+ score of 169 to date comes in at number 2 all time, only behind Joe Jackson (1911). Yes, its been over 100 years since baseball has seen a rookie hitter this talented. He isn’t a one trick pony either, Judge sprays homeruns to opposite field all the time.

Aaron Judge with 49 HRs as a rookie… His power to all fields is amazing @Yankees pic.twitter.com/hcakLADyyP

It isn’t crazy to think Judge could win league MVP this season. He is most certainly in the conversation, however over a 46-game slump this year he hit only .176 with 7 homeruns 17 RBIs and 70 strikeouts. In the 12 games they played against the Red Sox in that span, he hit .087 and was 4-46. There are better candidates in the American League that will most certainly beat him out, but his rookie season is one for the history books.