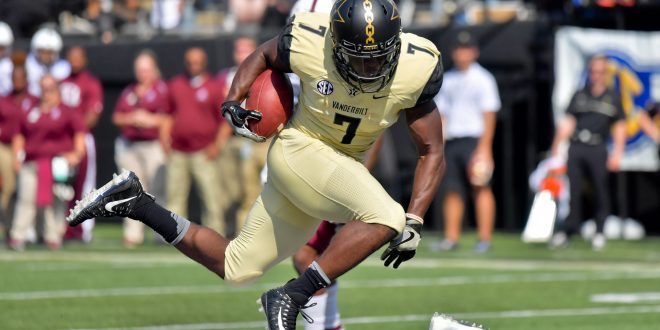 Although Homecoming for the University of Florida doesn’t happen till next week, it will be a homecoming of sorts when the Vanderbilt Commodores come to Gainesville to take on the 21st ranked Florida Gators. Vanderbilt senior running back Ralph Webb, a Gainesville native, returns to his hometown, where he has had much success at the Gators expense.

Coming out of Gainesville High School, Ralph Webb was a three star recruit who didn’t get an offer from the hometown Gators. Webb has made the Gators pay the last two times he faced them. In Webb’s first college game inside The Swamp in 2015, he rushed for 118 yards and recorded a 74 yard touchdown run to give Vanderbilt a 7-6 lead. The run was followed with a Gator chomp that angered the Gator faithful. When the venue changed to Nashville last year, the production remained the same. Webb totaled 110 yards in Vanderbilt’s 13-6 loss to the Gators. Florida Gators head coach Jim McElwain knows that Webb has been a challenge for the Gators the last two years.

Heading into the 2017 season, expectations were through the roof for the senior Vanderbilt running back. Webb was on both the Maxwell Award and the Doak Walker Award watch lists. However,the numbers for Webb aren’t what any was expecting at the start of the season. Through three games, Webb has 169 rushing yards, averaging 2.5 yards per carry, and only reaching the end zone twice. Outsiders might think that Webb has a case of senioritis and looking ahead to being Draft eligible. However, Vanderbilt radio sideline reporter Mitch Light puts the blame on the offensive line, not Webb. Light believes a strong running game can get the Commodores back in the win column, after an abysmal performance against top ranked Alabama last week.

The Gator defense is focused on slowing down the explosive Webb, who looks to get his senior season on the right track. After the loss to Michigan in Week 1, the Gator defense has been more effective in stopping the run. The Gators held both Tennessee and Kentucky to under 200 total yards (168 rushing yards allowed vs. Tennessee and 120 rushing yards allowed vs. Kentucky). Gators defensive lineman Jordan Sheritt knows the explosive ability of Webb. Webb will have moments on Saturday where he will get into the open field, where the Gators have experienced trouble tacking. Coach McElwain knows the Gators have to wrap him up when he gets into the open field.