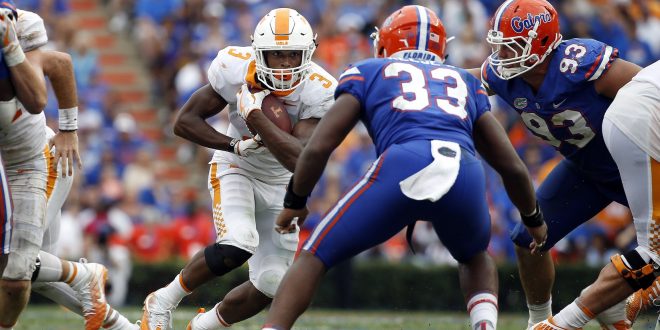 The Gators were thin at linebacker against Kentucky. Then they got even thinner after Sophomore Vosean Joseph was ejected for targeting.

Fortunately, Florida has linebacker David Reese who was able to carry the load for the defensive group. The Sophomore was everywhere as he led the entire team in tackles with eight.

It wasn’t a surprise Reese led the team in tackles because that is what he has been doing all-season long. The linebacker has the most tackles on the team with 12.

Pushed into the fire

One of the main reasons for Reese’s big year so far is the amount of experience he gained as a freshman. Under the leadership of guys like Jarrad Davis and Alex Anzalone, who are both currently playing the NFL, Reese was able to learn from them.

Davis and Anzalone both struggled with injury last season which forced Florida’s hand in playing the Freshman linebacker. In his first season, Reese played in 12 games, recording 14 solo tackles.

The Farmington, Michigan native played a crucial part for the Gators down the stretch last season in games like LSU where he had two solo tackles and assisted on 12 others.

Reese and the entire defense now have to prepare for this Saturday’s match-up against Vanderbilt in The Swamp. The Commodores offense features big time weapon and Gainesville native Ralph Webb. Webb has rushed for 110+ yards against the Gator in two straight seasons.

The last time Webb in Gainesville against Florida, he rushed for 118 yards and a touchdown. The Senior running back average yards a carry.

Reese says that the thing that makes Webb dangerous is his elusiveness.

Not in a position to overlook

It is easy to overlook a team that lost 59-0 the week before but Reese says that the game last week won’t mean much come Saturday.

This weekend’s game provides one of the more unique challenges for the young Gator defense. Kick off between Florida and Vanderbilt is at 12:00 p.m. on Saturday.