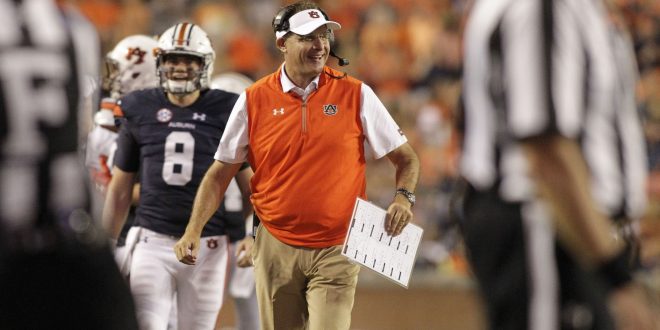 The No. 13 Auburn Tigers welcome their first SEC opponent to Jordan-Hare this season on Saturday when No. 24 Mississippi State comes into town.

The Bulldogs were outclassed last week against No. 11 Georgia, losing 31-3. Meanwhile, last week the Tigers played their most complete game of the year so far, as their rushing attack dominated Missouri for a 51-14 win.

Auburn’s offense is almost unstoppable when their blocking schemes are successful. This week they are adding another talented body at the line of scrimmage when senior lineman Darius James returns to the team after sitting out with an injury. Against Mizzou, seven different players ran the football with Kerryon Johnson scoring FIVE touchdowns on the ground.

When Auburn’s run game gets going – expect to see some deep shots off the play action just like this one.

A 9-play, 90-yard drive finished w/ a @AyeyoKEJO touchdown in Saturday's win over Mizzou is our @SunSouthJD Drive of the Game.#WarEagle pic.twitter.com/1W6xtMne5U

This is a scary thing for a team to see when they are forced to load the box up and commit safeties forward. Big completions off the play-action is a frequent flyer special that Auburn uses from their arsenal.

The All-SEC running back and lead carrier for the Tigers will return to action this weekend. Kamryn Pettway sat out of the Missouri game due to an ankle injury. Head Coach Gus Malzahn confirmed that Pettway will be good to go and has been practicing all week. He is leading the team with carries with 56 and is only 8 yards away from being the team’s leading rusher despite missing a game. The addition of a running back that rushed for over 1,000 yards last year is just another thing Mississippi State has to prepare for.

The team that dominated LSU two weeks ago looked completely different than the team that lost to Georgia 31-3. The offense for the Bulldogs executed everything at a high level against LSU, but while in Athens their offense was held to 280 yards. Poor quarterback play plagued Mississippi State last week as Nick Fitzgerald threw for only 83 yards and two interceptions. This was totally different than the FOUR touchdown performance he had against LSU the previous week. A big win in Auburn will get Mississippi State right back on track in the SEC.

The game is televised on ESPN at 6:00 pm Saturday night. Auburn is a 9 point favorite against Mississippi State.

Originally from Ocala, Florida. University of Florida Class of 2017. Avid FIFA player willing to beat anybody. Follow me on Twitter for everything you need to know!
@JoshLaSelva
Previous High School Football Preview: Gainesville at Forest
Next Volleyball Preview: Gators vs. Tennesee SEC Matchup