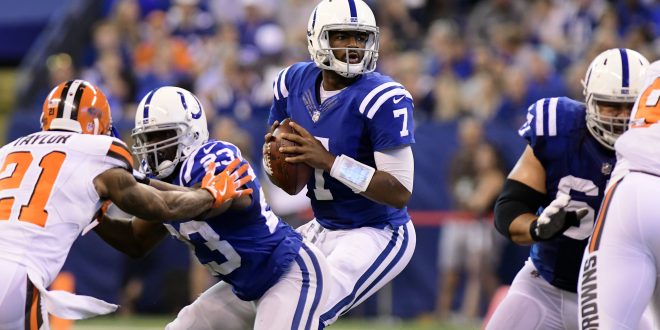 With the Indianapolis Colts’ quarterback Andrew Luck out again with his shoulder injury, a former Gator will get another chance to shine on the field as the Colts face the Seattle Seahawks Sunday.

Both the Colts and the Seahawks are 1-2 going into Sunday night’s game, and the Colts are coming off 31-28 win over the Cleveland Browns this past weekend, which was led by QB Jacoby Brissett.

During this game, Brissett passed for 259 yards and one touchdown, while rushing for 14 yards and two touchdowns.

With Brissett’s name dominating the headlines going into Sunday’s game, some may be asking, where did Brissett come from and how long will he be starting?

Brissett, 23, is in his second season in the NFL and in his first season with the Colts. However, before he got to the NFL he was the quarterback at both the University of Florida and at North Carolina State.

Coming out of William T. Dwyer High School in Palm Beach Gardens, Florida, Brissett committed to Florida in 2011. During his first season as a Gator, he was backup to starter John Brantley. Even though he didn’t play in every game, during his eight games in his freshman season he passed for 206 yards and two touchdowns with four interceptions.

The 2012 season brought less game action for Brissett with Jeff Driscoll taking the starting QB spot. Yet, in the five games he played he passed for 249 yards and one touchdown with no interceptions.

However, in 2013 Brissett decided to transfer to N.C. State. In accordance with transfer rules, Brissett sat out the 2013 season and started the next year.

At the end of his two years at N.C. State, Brissett passed for over 5,200 yards and 43 touchdowns with only 11 interceptions.

Draft and the NFL

In 2016, Brissett was drafted as the 91st pick in the 3rd round by the New England Patriots.

During last season, and with quarterback Tom Brady out for his suspension and Jimmy Garoppolo injured, Brissett got some professional playing time.

Fast forwarding to this year, Brissett dominated the Patriots’ preseason. As reported by CBS Sports, he threw for 341 yards and four touchdowns against the New York Giants and Patriots preseason face-off.

Except the new season also brought some new changes for Brissett. With Colts’ QB Andrew Luck still in recovery from his offseason shoulder surgery, the Colts were in need of a starting QB that could help their situation as they headed into their regular-season opener against the Rams.

At the beginning of September, the Colts traded wide receiver Phillip Dorsett to New England and acquired Brissett to set up their starting QB spot.

During a recent interview, Brissett commented how it was a great experience getting to learn from the group of guys he played with and was surrounded by in New England.

Looking ahead at what’s to come, Brissett shared what having a year under one’s belt can do and what he is going to do moving forward.

When Luck returns, it’s likely Brissett will see less playing time and return to being backup for Luck. For now though, Brissett will hold the title of starting quarterback as the Colts travel to Seattle for an 8:30 p.m. kick-off on Sunday, Oct. 1.