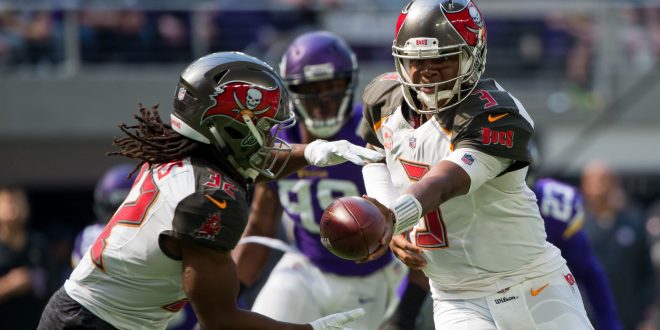 The Tampa Bay Buccaneers will be hosting the New York Giants this Sunday. Both teams have had a bit of a rocky start. More so, for the New York Giants who are 0-3. Meanwhile, the Buccaneers are 1-1 having missed a game to the Miami Dolphins, due to Hurricane Irma. Both teams have super-star names on their rosters and its early enough in the season that a win this week could help propel them to be a real threat.

So Far For The Bucs

The Tampa Bay Buccaneers opened the season to the Chicago Bears with a huge 29-7 win. Quarterback Jameis Winston threw for 204 yards and one touchdown. The Tampa Bay defense stepped up to the plate to only allow 20 rushing yards with one TD by former Florida Gator Deonte Thompson. In their second game of the season, the Bucs fell to the Minnesota Vikings 34-17. Backup QB Case Keenum had a great game with 396 passing yards and 3 TDs. Even though the Buccaneers lost, a good note would be that Desean Jackson, Adam Humphries and Mike Evans all had a strong showing. Jackson having the only touchdown of the night for the Bucs.

Jameis Winston and Eli Manning are two top quarterbacks in the NFL. In an interview, Winston says that one of the Bucs strengths on offense is that he utilizes all of his receivers.

One of the stand out receivers on the offense and one of Winston’s go to guys is wide receiver, Mike Evens. Who has received 14/21 passes, with 160 yards, and one touchdown. It will be interest to see whether Mike Evens or Odell Beckham Jr., both receivers from the 2014 draft class, has a better showing. Winston also expressed just how good he thinks both players are on offense.

Jameis Winston currently has a 65.7% completion record, with 532 yards and three TD’s this season. However, with his strong receiver game it is likely his numbers will soon grow.

So Far For The Giants

For the New York Giants, they opened the season with a loss to the Dallas Cowboys 19-3. However, the Bucs where without star receiver Odell Beckham Jr. Who suffered a sprained ankle in a preseason game against the Cleveland Browns. Odell Beckham was back for their second game of the season to the Detroit Lions. However, the team was still unable to pull off a win and suffered a 24-10 loss.

In last weeks game, the Giants where able to keep it close, but were no match for the Eagles kicker, Jake Elliott. They lost 27-24 when Elliott kicked the longest field goal in Eagles history to put them ahead.

Eli Manning, despite having a bad record, has a 73.5% completion rate, with 825 yards and four TD’s this season.

Injury Report for the Bucs

After last weeks game against the Minnesota Vikings, the Buc added 6 more players to their injury report. Moving the total to 10 players. Four players had full practice this week including Chris Baker, Brent Grimes, Jacquies Smith and Noah Spence. Three players had light practice including Robert Ayers, Gerald McCoy and J.R. Sweezy. The Players who were unable to practice were Kwon alexander, Lavonte David and T.J. Ward.