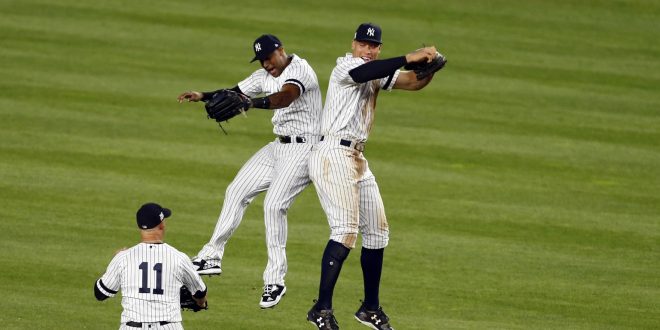 The first game of the 2017 Major League Baseball playoffs brought no shortage of excitement. Following a 45-minute first inning and five combined home runs, the New York Yankees would pull away to defeat the Minnesota Twins 8-4 in the American League wild-card game.

The Twins would jump out to a quick start following a lead-off home run by second baseman Brian Dozier. Moments later left fielder Eddie Rosario would blast a two-run shot to right field to put the Twins up 3-0 in the top of the first inning.

The lead, however, wouldn’t last long. The Yankees would respond in the bottom of the first inning with a three-run homer by shortstop Didi Gregorius, tying the game at 3-3.

1st inning. Yankees down 3-0. Starting pitcher out of the game.

Clinging to a 5-4 lead in the fourth inning, Yankees right fielder Aaron Judge would launch a two-run shot to left field to extend the lead to 7-5.

ICYMI: Aaron Judge cranks a missile over the LF wall to help the Yanks advance to the ALDS pic.twitter.com/Cy9aFPvqoB

The Yankees would add another run in the seventh inning to ice the game at 8-4.

Following a disappointing start by pitcher Luis Severino, the Yankees bullpen would bounce back. Chad Green would replace Severino in the top of the first inning, allowing one earned run in two innings of work. Meanwhile, David Robertson, Tommy Kahnle and Aroldis Chapman would step-in and hold the Twins scoreless for the remainder of the game.

The Yankees will now get their shot at the defending American League champion Cleveland Indians in the American League Division Series. Game 1 of the best-of-five series will take place on Thursday at 7:30 p.m. EST at Progressive Field in Cleveland, Ohio.

Matthew is currently a senior, majoring in telecommunications with a minor in business administration.
@matt_levay
Previous Florida Basketball Media Day Recap
Next NL Wild Card Preview: Diamondbacks and Rockies Battle to Move On