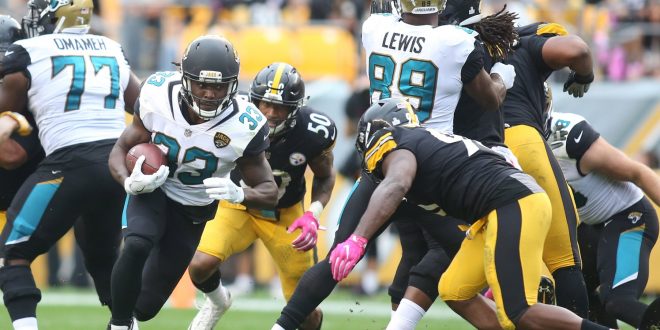 Any pre-season doubts fans had about the fate of the Jacksonville Jaguars should melt away. The team’s Week 5 record of 3-2 already ties last year’s total wins. In a stunning win, the Jags beat the Pittsburgh Steelers in Pittsburgh on Sunday 30-9, their first win over the Steelers in 10 years. However, win wasn’t a fluke, luck, or even a close game.

The Steelers were first on the board with a field goal in the first quarter.  Jacksonville took the lead after rookie running back Leonard Fournette ran two yards for a touchdown.  Pittsburgh’s Chris Boswell kicked two more field goals to make it 9-7 Pittsburgh but that’s where the Jags took over.

Pittsburgh quarterback Ben Roethlisberger threw five interceptions in the game, and two were pick-sixes by Telvin Smith and Barry Church.  A fourth quarter field goal brings the score to 23-9, and with less than two minutes left, Fournette breaks off for a 90 yard touchdown run for the final points on a successful Jags day.

For years, the Jaguars have given their fans hope with off season acquisitions but many times those free agent signings or draft choices didn’t pan out.  But it looks like that has changed, as the team leads the AFC South.

The Jags avoided turnovers in this game.  Quarterback Blake Bortles had a great running game at his disposal and he used it to great advantage.   He did not have an interception in the game.

New Blood is Ready to Pounce

In fact on Sunday, Bortles only attempted 14 passes, a career-low. Instead, the running game and defense took over.

Bortles was Jacksonville’s first round pick in 2014. Since then, the Jags first round picks have been Dante Fowler (DE), Jalen Ramsey (CB), and Leonard Fournette (RB).  Not to mention, two of the team’s three second round picks after 2014 have either been a running back or defensive piece as well. (OT Cam Robinson was the second round pick in 2017.) After a while, these top college guys start to accumulate. And they want to make an immediate impact.

Take Fournette for example. The former SEC superstar was drafted fourth overall and was expected to have a solid rookie career. Against the Steelers, he ran for a career-high 181 yards and two touchdowns. See what he had to say about it here. When deciding between a white-hot Fournette and an ice-cold Bortles, the Jacksonville Jaguars should not have a difficult decision.

The Jaguars had a great game, and they get to come home to face an offensively talented Los Angeles Rams team who have the same 3-2 record after falling to the Seahawks.