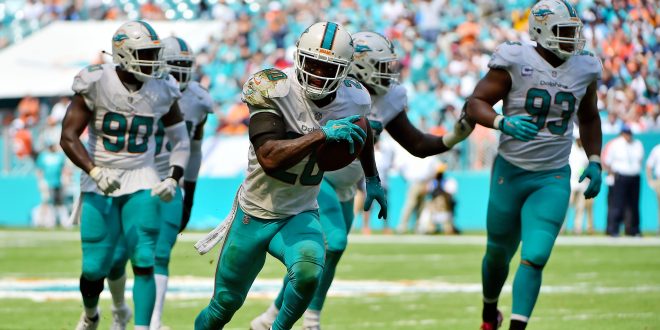 The Miami Dolphins picked up their second win of the season in a 16-10 effort against the Tennessee Titans.

While the Dolphins’ offense put up another poor performance, the team was able to pull out a victory due to their great defensive performance. Dolphins’ safety Reshad Jones and linebacker Kiko Alonso had great games, leading the Miami defense against a Tennessee team who was without starting quarterback Marcus Mariota. Alonso and Jones both had seven tackles, which was tied for the lead among Dolphins’ defenders. Alonso forced a fumble on the day and Jones recovered two fumbles. The first fumble recovery in Titans’ territory set the Dolphins up for a 41 yard field goal and the second fumble was scooped up by Jones and returned for a touchdown, which gave Miami a 10-0 lead after the first quarter. Miami held Tennessee to just 188 total yards, 14 first downs, and 10 total points.

After scoring a total of six points in the last two games, the Miami offense didn’t look much better against the Titans. The offense scored nine points, three of which were set up by the defense giving Miami great field position. The team had just 178 total yards, two turnovers, 12 first downs, and was able to put together just one touchdown drive. Quarterback Jay Cutler had another poor game, completing just 12 of 26 attempts for 96 yards to go with one touchdown and one interception. Jay Ajayi had his third less-than-stellar game in a row, rushing for 77 yards on 25 attempts and one fumble.

Time for a change at QB?

Despite the win, Dolphins fans made it very clear they were unhappy with the team’s offensive performance and specifically with the play of quarterback Jay Cutler. The Miami fans started booing Cutler in the second quarter and called for backup QB Matt Moore. Fans chanted “we want Moore” despite the team leading 10-3 at the time. Cutler said he didn’t hear the boos but will take some blame as the team’s quarterback.

The Dolphins have much to figure out if they are going to have a successful season. The team will travel to Atlanta for a week 6 match-up with a heavily favored Falcons team. The game will kick off at 1 p.m. ET on Sunday.