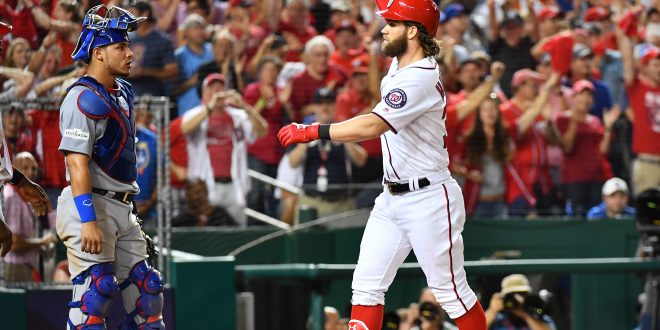 The NLDS is tied at one game apiece. With the series split, the Cubs will bring the series to Wrigley to face off against the Nationals.

The Cubs shut out the Nationals in Game 1 after a strong pitching matchup. Kyle Hendricks and Stephen Strasburg each went seven innings. The difference? Strasburg gave up two unearned runs. Hendricks was lights out, giving up no runs and striking out six. The Cubs took Game 1 with a score of 3-0.

This was Harper’s first homer since before his knee injury, just over two months ago.

Just three hitters after Harper came a 3-run blast from Ryan Zimmerman. Washington took this game with a score of 6-3.

With the series split, Game 3 will swing the momentum in one team’s favor. The Cubs will have their home crowd supporting them. The Nationals will have their arguably-best pitcher on the mound in Max Scherzer. The end goals? The Cubs are fighting to defend their title. The Nationals are looking to make just their second appearance in team history in the NLCS. Game 3 will be a pivotal point in this best-of-5 division series. Here’s the lineup for today.

The @Cubs, @Nationals series shifts to Chicago. Who will take the 2-1 series lead? https://t.co/pXQ2sbv4w3 #NLDS pic.twitter.com/vi5HB552dg

The Nationals will send two-time Cy Young winner Max Scherzer to the mound. Scherzer has been dealing with a hamstring injury and will be making his first start of the postseason. He is the most experienced pitcher on the staff in regards to postseason play. Scherzer went 16-6 in the regular season with a 2.51 ERA. However, he is 4-4 in his postseason career, posting an ERA of 3.74.

Jose Quintana will take the hill for Chicago. The Cubs acquired Quintana from the White Sox in the second half of the season. This will be his first career postseason start. Quintana has struggled early in games, recording a first-inning ERA of 5.62. However, he has settled in as the season progressed. One of his more notable starts this season was his September shutout against the Milwaukee Brewers. Quintana has never faced the Nationals, which could be an advantage for this lefty.

In 1 hour, a premier pitching matchup headlines Game 3 between Nats-Cubs.

This should be a good one on @TBSNetwork. https://t.co/WyPDSKckgs pic.twitter.com/HEmQNiHIwk

Born and raised at the ballpark! Typically quiet- until it comes to sports. I'm a South Florida native with a passion for baseball nearly as strong as my faith. Grew up in garnet + gold, turned out sporting orange + blue. Likely to be found with a camera. And yes, I take food pictures.
@victoriarossman
Previous Press Conference: McElwain Addresses Injuries and Texas A&M
Next SEC Football Roundup: Week 6