Blowouts and one close game-upset took over the top headlines in week 6 of the SEC conference. 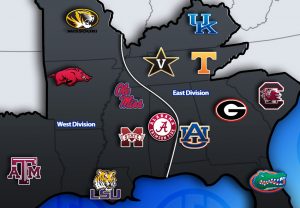 The Gators couldn’t get the ball rolling in their 16-17 loss against the Tigers this past Saturday in their latest conference rival matchup. LSU came off an embarrassing defeat against Troy the week prior to facing the Gators, and they were looking for redemption. The Tigers dominated the overall flow of the game from start to finish.

QB Danny Etling threw for 9-16 completions for 125 yards and one touchdown in the second half of the game to Tory Carter which helped seal the game. The Gators did have momentum at one point in the 3rd quarter, scoring two back-to-back rushing touchdowns by Lamical Perine. Unfortunately, the unexpected happened as Eddy Pineiro missed his first extra point of his collegiate career. He had scored 46 straight before the whiffed kick. The missed PAT was the dagger for Florida, and sealed the “W” for LSU.

Even more so, Devin White of the LSU Tigers received SEC Defensive Player of the Week after his great performance against the Gators, finishing with 13 tackles and 1 sack.

Georgia once again came into this week as the favorites over the Vanderbilt Commodores, who have yet to win a conference game this season against other SEC opponents.

The #4 ranked Bulldogs came into Nashville and made it their doghouse, defeating the Commodores 45-14. Georgia ran all over Vanderbilt, literally and figuratively. The Bulldogs rushed for 423 yards, the most since their 454 yard game against Vanderbilt in 1987. Nick Chubb and Sony Michell both led the way for the running game, breaking 100 yards+ each. While quarterback Jake Fromm led the team through the air. He threw 7-11 completions for 102 yards and 2 touchdowns.

Again, Vanderbilt had another terrible outing on both sides of the ball. It took the first and last quarter to put points on the board. Vanderbilt’s quarterback Kyle Shurmer threw for 172 yards and 1 touchdown.

They say a great defense wins games, and South Carolina definitely proved that to be right in their 48-22 win over Arkansas. The Gamecocks scored three defensive touchdowns in what seemed a close game that turned into an utter blowout. Two of the touch downs were pick-sixes by Skai Moore and Keisean Nixon and the other was a 73-yard fumble return by T.J Brunson. Furthermore, It was easily the best defensive performance by the Gamecocks this season and they’re looking to keep this momentum heading into next week when they face the Tennessee Volunteers.

The Wildcats scored over 30 points for the first time this season, defeating the Tigers 40-34 in a hair-pulling fourth quarter. The Wildcats scored 20 on the Tigers in the first half and especially didn’t let up in the second. Kentucky’s quarter back Stephen Johnson had a great game all throughout. He had pocket presence and confidence against this weak Missouri defense, which allowed him to throw for 298 yards and two touch downs.

Furthermore, the Kentucky offense in its entirety achieved 486 yards. Benny Snell Jr had himself a great game and ended with 20 touches for 117 yards and two touchdowns. The Wildcat defense didn’t look sharp for most of the game until the final moments, when it counted most. They stopped the Tigers’ final drive and prevented an embarrassing defeat, turning it into a nice win at home against the worst team in the SEC East.

Congrats to @H_Huncho on winning @SEC Freshman of the Week for his performance in Saturday's win over Missouri. #GoToWork pic.twitter.com/sQE6vjohLC

This was one of those games where you already knew who was going to win by the second quarter, as Auburn led the way 35-3 at halftime. Auburn quarterback Jarrett Stidham and running back Kerryon Johnson dominated Ole Miss from the gecko. Stidham threw 14 of 21 completions for 235 yards and two touch downs while Johnson rushed for 204 yards and 3 touch downs.

However, Ole Miss’ quarterback Shea Patterson, did all he could to keep the game alive by throwing for a remarkable 356 yards with two touch downs. But it clearly wasn’t enough against this top 10 Auburn team that keeps getting better by the week.

Surprisingly, #1 Alabama probably had its closest game of the season thus far when they traveled to College Station to take on the Aggies. Although they still won 27-19, you couldn’t help but notice the potential comeback that A&M could’ve pulled off if a couple of plays would’ve gone differently. The Crimson Tide’s run defense was too much for the Aggie’s running game, as their starting tail back, Trayveon Williams could only amount to 38 yards. As a result, both teams averaged around 300 yards, but Alabama’s offense is hard to stop when they are prone to not making mistakes.

Recent grad from the University of Florida. Editing all articles on here while helping out the newbies. Love all things basketball.
@@MarcoJMartinez_
Previous NLDS Game 3 Preview: Cubs vs. Nationals
Next Diamondbacks and Dodgers Face Game 3 Tonight