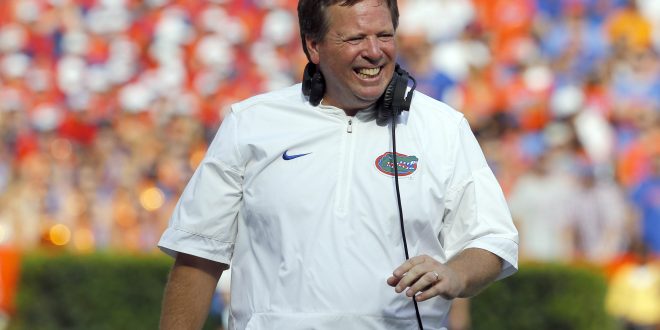 After the Florida Gators 17-16 loss against the LSU Tigers last week, football head coach Jim McElwain and the players are very disappointed. Despite the loss, McElwain believes everyone played hard and with passion.

McElwain believes when you play on the road you have to be good at third downs, which was something LSU was very good at. Now, all the Gators can do is move on and continue to look forward to this week of practice and to this week’s game against the Texas A&M Aggies.

In today’s press conference, McElwain announced a long list of players who will not be participating in today’s practice and some who might be questionable for this week’s game due to injuries that occurred over the weekend. To start out, Nick Washington will be out of today’s practice due to a reoccurring shoulder injury. Offensive lineman Brett Heggie is doubtful for this week’s game based on concussion protocol. Wide receiver Tyrie Cleveland’s status is still unsure, but will not be practicing today. McElwain says his injury is going to be a tough one.

Chauncey Gardner Jr. and Jeremiah Moon both played well against the Tigers, but as for their injuries nothing will be certain until Wednesday. As of right now though, they will practice today. Kadarius Toney got banged up in the first quarter against LSU, but continued to play and finished the game. Toney is now highly questionable. If Toney is out, McElwian says Dre Massey will be ready to go in. According to McElwain, everyone of these players will not be at practice today and their status will become more certain as the week progresses.

On the quarterback front, Feleipe Franks still has some challenges. His challenges all depend on a situational stand point. McElwain believes Franks is continuing to work hard and needs to be given more time to deliver. Franks get too deep into the pocket sometimes from a stride standpoint. McElwain noted that there is a launch point with Franks that they need to continue to work on. However, his ball security is getting much better.

McElwain believes the Aggies are a very talented team that will certainly press the tempo. The Gators will need to learn to get to the line quickly and go, something they struggled with against LSU. Offensively speaking, Texas A&M’s quarterback is very mobile and is good on his feet on third downs. Third downs are something the Gators will focus on during practice this week due to their struggles over the weekend. However, a bigger issue for Florida is going to be playing against Texas A&M’s defense. McElwain says protection is going to be huge this week.

Coach McElwain thinks the Aggies will look back to footage against Vanderbilt and analyze how the Commodores threw the ball against us. They will use those weaknesses as opportunities. Overall on Saturday, McElwain says the Gators will have their work cut out for them this week.

Sydney is a senior studying telecommunications with a specialization in sports media at the University of Florida. She is a multimedia sports reporter for ESPN 98.1 FM/850 AM WRUF and WUFT-TV.
Previous Indians lose to the Yankees in game 3 ALDS
Next NLDS Game 3 Preview: Cubs vs. Nationals