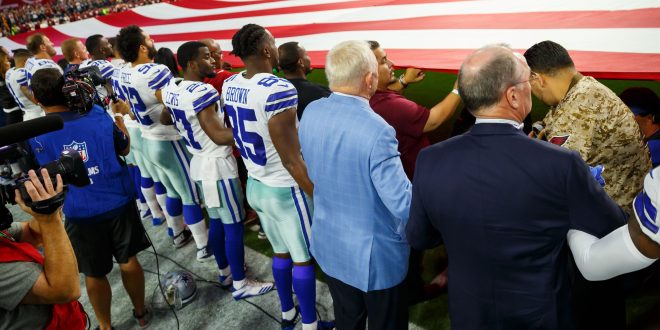 Cowboys Will Stand For National Anthem

Amidst the controversy in the NFL regarding the National Anthem, one thing is for certain—America’s football team will not be kneeling.

Week 3 in the NFL

In Week 2 of the NFL, just six players protested the National Anthem. One week later, more than 200 players either stood, kneeled or raised a fist. Jerry Jones and the Cowboys did it differently as they kneeled while locking arms prior to the Anthem, then stood. Despite kneeling prior to the National Anthem, many people were confused as to why Jerry Jones kneeled at all.

“The reason that I’m particularly proud of this team and the coaches that coach them is because we all agreed our players wanted to make a statement about unity and we wanted to make a statement about equality,” Jones said following the game. “They were easily made very much aware that that statement, when made or when attempted to be made in and apart of the recognition of our flag, can not only lead to criticism but also controversy.”

Following Week 5, Jerry Jones clarified the Cowboys will stand during the National Anthem throughout the remainder of the season.

“I’m saying our vice president of the United States if in his opinion there’s disrespect of the flag, then he should – he basically should — express himself however he wants to,” Jones said. “He’s got rights, too, so however he wants to do it. He felt that not standing for the flag is disrespectful. I do, too. The league, in my mind, should absolutely take the rules we’ve got on the books and make sure that we do not give the perception that we’re disrespecting the flag.”