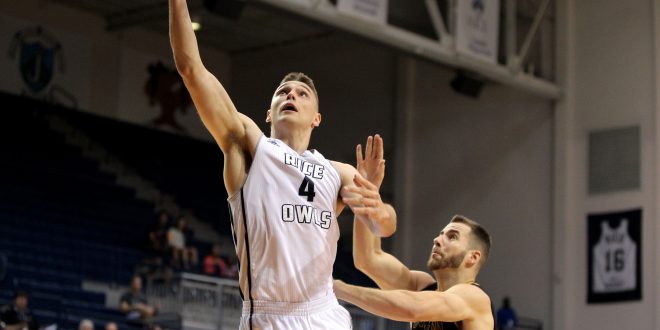 Egor Koulechov Adjusting to Life As a Florida Gator

After being a part of Arizona State and Rice University, Egor Koulechov now calls the Florida Gators home. The 6’5″, 210 pound guard from Russia is looking forward to playing for the Gator Nation.

While Koulechov is making his debut for Florida this season, he holds the experience needed to be an integral part of another March Madness run. He spent the 2013-14 season as a freshman at ASU. During his time, he played a total of 377 minutes, 35-for-88 field goals made and 11-for-33 behind the arc.

In 27 games played for the Sun Devils, he averaged 14 minutes, 2.8 rebounds and 0.6 assists per game before transferring to Rice University as a redhsirt freshman in 2014.

After his junior season at Rice, he would make the decision to leave the program in a tweet explaining why.

After deciding to pursue other personal challenges and leaving Rice, Koulechov would make the move to the Gator Nation. While it is a bold move for Koulechov, it is a challenge he is looking forward to facing.

While he knows his way around the hardwood, he is in the middle of an adjustment period to the Gators. Koulechov has been on both big and small campuses, but says that Florida is a blend of both. While plenty of students go to UF, he still feels as if it’s a small campus.

Koulechov also had a limited amount of time to adjust to the campus before being sent off to the World University Games. He spent about two weeks on campus getting acclimated to the system of Mike White. He was hoping to spend his summer at UF to really adjust and learn the system, but it was not meant to be.

Koulechov is joining a team that is looking to make a serious playoff run again this season. He looks to be a big part of that, while looking forward to playing with veterans of the team that would lead the charge for Florida in March Madness last season. Among those he’s excited to play with are Chris Chiozza and Jalen Hudson.

With his unique offense and play-style, Koulechov is looking to be a key player in another Florida Gators push to playoffs this season.

The Florida Gators’ season is right around the corner. They begin with an exhibition game against the Tampa Spartans on Nov. 5 at 2 p.m. from the ExaTech Arena at Stephen C. O’Connell Center. The team follows that with two more games before participating in the Phil Knight Invitational. For more on Gators men’s basketball, stick with ESPN Gainesville as we march toward the new season.