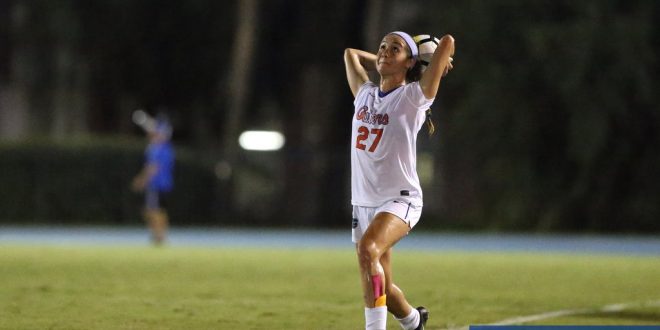 In a top-20 matchup, the 16th ranked Florida State Seminoles got a 2-0 victory over the 10th ranked Gator soccer team Thursday in a physical game at Gainesville.

It took less than two minutes for the Seminoles to get the early lead. Kristen Cardano made a short pass to Kaylan Marckese that caused an indirect free kick in favor of the Seminoles. Deyna Castellanos went right away to the free-kick spot. She made a well-measured indirect free kick that ended up on the left corner of the net.

During the first 30 minutes of the first half, the Seminoles dominated the game thanks to their feisty high pressure on the Gators’ midfield and backline. The Gators created chances sporadically that came from a couple of set-up plays and a long shot by Briana Solis. Florida struggled mainly because of the positional discipline by the visitors.

The main orchestrator on the Seminole side was Anna Patten. Patten anticipated every Gator transition on offense and recovered the ball quickly. She also displayed a great vision at distributing the ball through different passing lanes; this allowed many Seminole players to split defenders and created danger.

In the 24th minute, the Seminoles finished a collective play that started by a Patten build-up; she sent the ball to Emily Madril who was on the right wing; Madril served the ball to Gloriana Villalobos on the run; Villalobos drove the ball to cut through the right-middle side of the box; she made a short assist to Dallas Dorosy, who split the center-backs and made the easy definition.

Florida’s Took Control in The Second Half, But It Was Not Enough

The Gators started to feel like themselves during the second half. Gator midfielders had more space and time to use their vision and create chances for their forwards. It is important to take into account that the Seminoles slowed down their high pressure in comparison to the first half.

The visitors changed their game plan to use their lateral speed of their forwards off the ball to exploit the open gaps via counterattacks. But this strategy worked sporadically because of the stable zonal marking by the Gators. The home team balanced the game thanks to their quick recovery and fluid ball movement. They ended up having more shots than the visitors (10-8).

Gator coach Becky Burleigh praised her team performance despite the loss. This was the second time during this season that the Gators were not able to score a goal. The next game for the Gators will be on the road; they’ll visit the Auburn Tigers on Sunday at 3 p.m.