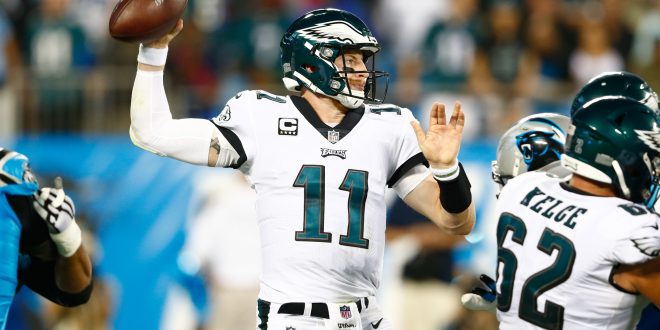 Close one in Charlotte

It was a close game in Charlotte for four full quarters, but the Philadelphia Eagles came out on top with a final score of 21-16.

During the first quarter, both teams only kicked field goals.

Carolina’s quarterback Cam Newton rushed for a touchdown and passed for another one, but was still sacked three times by the Eagles.  The second touchdown wasn’t earned until the second quarter which was by the Panthers. This extended the score 10-3 but not long after that the Eagles scored a touchdown, which tied the game right at the end of the first half. Also during the first half was the Panthers strong sacking game, which they sacked the Eagles three times during the first half. “We have good ingredients to win. In a game like that you have to protect the football better.” Newton said.

Also around this time, at the end of the second quarter, Panthers linebacker Luke Kuechly took a hard hit to his neck from the Eagles offensive lineman Brandon Brooks. Kuechly left the game in order to go through concussion protocol.  The former AP NFL defensive player of the year squatted down with five minutes left in the half and then walked to the trainers to test out his neck, when he shortly went into the locker rooms. This isn’t his first time dealing with concussions, as he missed nine total games in the past two seasons due to concussion issues. He didn’t join the team for the second half of the game.

At the end of the third quarter, the score was 21-16 in the Eagles favor. The Eagles got a touchdown, as well as a two point conversion with a field goal. “It feels good

In the fourth quarter, once again, it was super close. Both teams picked up touchdowns. With eight minutes left in the fourth quarter rookie running back Christian McCaffrey made it a one possession game with a touchdown. McCaffrey added ten total catches to his 37. He got these catches through six games and if he keeps this pace up he’ll finish the NFL season with 99 catches. This puts him close to the NFL rookie record of 101 catches, which is owned by Anquan Boldin in 2003. However, he already past Reggie Bush’s 2006 record pace for  rookie running back catches of 88

Wentz Was Too Much

Wentz was just too much for the Panthers. He threw for 222 yards and three touchdowns for the entire game. He also completed 16 of 29 passes.

“It feels good, it says a lot about the guys in this locker room. They did some good things defensively, we struggled on the road last year and with close ball games, but we’ve done it successfully the first six games. ” Wentz said

The Eagles defense however, was just too strong for the Panthers and Carolina just couldn’t score the points needed to win this game, thus giving the Eagles the 28-23 win.