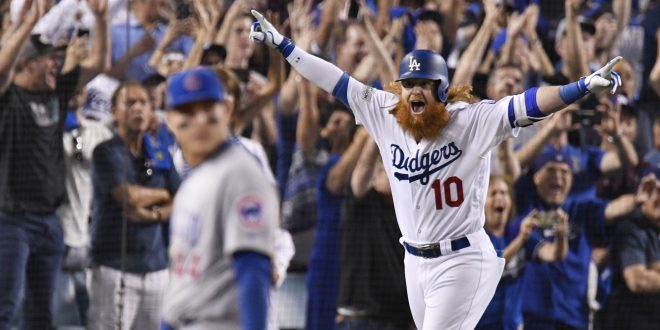 Justin Turner after hitting a three-run, walk-off homer to win the Dodgers Game 2 of the NLCS.

The Los Angeles Dodgers took a commanding 2-0 lead in the National League Championship Series with a 4-1 win over the Chicago Cubs.

Dodgers’ third baseman Justin Turner stepped up big for his team. With two outs and a 1-0 pitch count, Turner blasted a homer run off of the Cubs pitcher John Lackey.

Growing up in Southern California, Turner was always a Dodger fan.

In an interview with MLB.com’s Sam Ryan, Turner talked about how his earliest baseball memory was sitting on his grandmother’s couch, watching Gibson hit that home run.

However, Turner was nervous that is miracle moment would be taken away.

The deep center field walk-off scored Yasiel Puig and Chris Taylor before Turner rounded home plate. The victory provided much needed momentum as they travel to Chicago for games 3 and 4.

Criticism for the Cubs

The loss for the Cubs was crushing as they now head home down 0-2. Cubs’ Manager Joe Maddon came under fire for his decision to have right-hander John Lackey out on the mound instead of Wade Davis.

Davis has been the main work horse for the Cubs this post-season. During the NLDS, Davis pitched 2 1/3 innings without Lackey ever even coming to the mound. The dominate performance helped the Cubs advance.

Maddon addressed the issue saying that under different circumstances, Wade would have been out there.

As the series heads back to Chicago, the Cubs will need to step up. The team can’t afford to split games back at Wrigley.

First pitch is scheduled for Tuesday at 9:00 p.m EST on TBS.