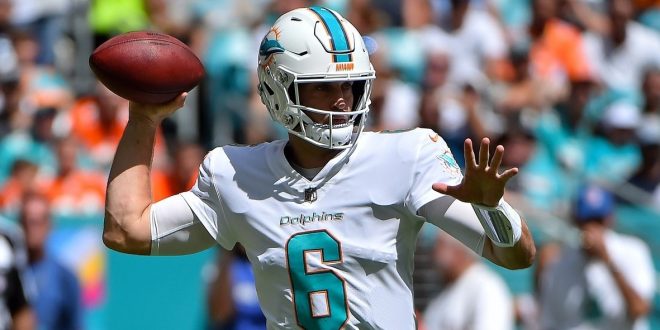 Dolphins come back to beat Falcons after 17-point deficit

The Miami Dolphins (3-2) defeated the Atlanta Falcons (3-2) by a score of 20-17 on Sunday after being down 17-0 at halftime. Atlanta’s quarterback Matt Ryan had an interception late in the fourth quarter when his team was in position to at least score a field goal to tie the game.

Atlanta owned the first half of the game. The Falcons’ offense started off with a 50-yard field goal by Matt Bryan and a 40-yard touchdown pass from Matt Ryan to Marvin Hall in the first quarter. Running back Tevin Coleman added another touchdown with a six yard-run in the second quarter to extend the lead to 17-0 at halftime. Dolphins’ quarterback Jay Cutler did not complete a single pass longer than 12 yards in the first half of the game.

Everything looked like the Falcons were heading for an easy victory but in the second half, the 70.500 football fans at the Mercedes-Benz-Stadium in Atlanta got to see a totally different Dolphins team. Miami scored its first touchdown after an impressive 15 play, 75-yard drive. They scored again at the end of the third quarter, when Jay Cutler found Jarvis Landry open in the end zone for a seven yard pass. Cutler completed 19 of 33 passes for 151 yards and two touchdowns in the game.

In the fourth quarter, it was Dolphin kicker Cody Parkey who first completed a 49-yard field goal to tie the game at 17 and then hit another field goal to give his team its first lead with 4:30 remaining.

With 43 second on the clock, Falcon quarterback Matt Ryan threw away his team’s chance to win the game; his pass intended for Austin Hooper was touched by Cordrea Tankersley and intercepted by Reshed Jones at the Dolphin eight yard line. This game-clinching play was Ryan’s sixth interception in the last three games for the Falcons.

The Miami Dolphins are going to face the New York Jets for the second time this season on Sunday. In Week 2 the Jets took a 20-6 win.