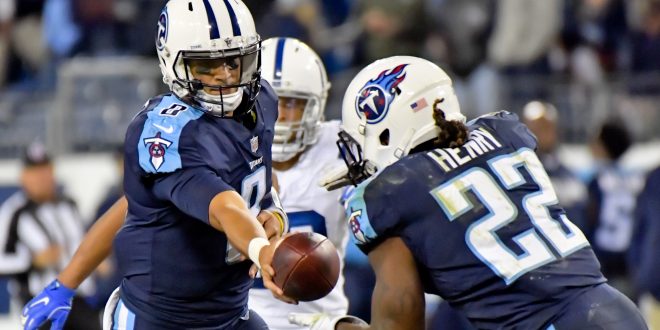 Oct 16, 2017; Nashville, TN, USA; Tennessee Titans running back Derrick Henry (22) rushes for 72 yards for a touchdown after getting the handoff from Titans quarterback Marcus Mariota (8) during the second half against the Indianapolis Colts at Nissan Stadium. Mandatory Credit: Jim Brown-USA TODAY Sports

Two teams in the AFC South were 3-3 and tied for first place before Monday night. Now, you can add the Tennessee Titans to that list.

To do that, the Titans had to beat a team they’ve had trouble with lately. The Indianapolis Colts came into this matchup with 11 straight victories over the Titans. However, the odds seemed to be in Tennessee’s favor as Colts’ starting quarterback Andrew Luck was still out with a shoulder injury. Jacoby Brisset has handled a large portion of the responsibility for the Colts, passing for 997 yards and two touchdowns on 61 percent passing coming into this game.

The game started off as a defensive struggle, with neither team able to score a touchdown in the first quarter. After both teams were scoring field goals, the Colts scored the first touchdown of the game in the second quarter when Brissett tossed an 8-yard touchdown pass to tight end Jack Doyle to put the Colts up 10-6. The Colts’ next and final touchdown would come on a 26-yard pick-six by linebacker John Simon. That would put the Colts up 19-9.

After scoring nothing but field goals in their first five scoring drives, the Titans’ offense came to life in the fourth quarter. Their first touchdown came on a three-yard touchdown run by running back DeMarco Murray. After that, quarterback Marcus Mariota tossed a 53-yard touchdown pass to rookie wide receiver Taywan Taylor. Finally, running back Derrick Henry put the nail in the coffin with a 72-yard touchdown run. This gave the Titans the 36-22 win over the Colts. The Titans outscored them 21-3 in the fourth quarter. Even with the slow start, Titans head coach Mike Mularkey said he knew the touchdowns would eventually come. This was Tennessee’s first victory over the Colts since 2011. With the win, the Titans move to 3-3 as mentioned before while the Colts drop to 2-4.

Derrick Henry ices the game with a 72-yard touchdown run, the longest run of his career for his first 100-yard game! #TENvsIND pic.twitter.com/dCNZAlom5d

The Titans had 168 yards on the ground, and Henry paved the way with 131 of those yards on 19 carries, averaging just under seven yards per carry. It was his first ever 100-yard rushing game in his pro career.

Even in the loss, Simon played out of his mind and deserves to be recognized for his efforts. The linebacker led all players with 11 total tackles and gave the Colts a good chance to win the game with his 26-yard pick six. In addition, he also had a sack, 2.5 tackles for loss, a pass defended and three quarterback hits.