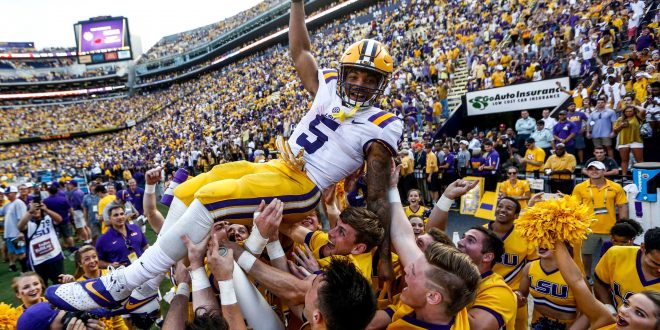 The college football landscape can change in an instant. Four top ten teams (Clemson, Washington, Washington State, and Auburn) were defeated this weekend, which leaves the quest for a national championship wide open. Alabama and Georgia look primed for appearances in the College Football Playoffs, but if there’s something that college football has taught us, it’s that nothing is guaranteed.

What Happened This Week in the SEC?

It seemed like Auburn was going to run away with this game after racing out to a 20-0 lead in the second quarter. However, LSU dominated the second half and prevailed by a score of 27-23. The victory was highlighted by stellar play from LSU’s defense and special teams. D.J. Chark recorded a 75-yard punt return touchdown, and the LSU defense allowed 64 yards and no points in the second half. LSU head coach Ed Orgeron praised Auburn for being a great team, but said his team’s resiliency is the reason they won the game.

Kerryon Johnson led the charge for Auburn with 156 rushing yards and a touchdown. This loss dismantled Auburn’s hopes of competing in the SEC Championship Game, unless they can take down Alabama in the Iron Bowl.

Florida was leading for a majority of the game, but Texas A&M came on strong in the fourth quarter and won 19-17 in a thriller in the Swamp. Texas A&M quarterback Kellen Mond only completed eight passes on the day for 180 yards, but ran for an additional 52 yards and a touchdown. Aggie kicker Daniel LaCamera made all four field goals he attempted, which was just enough to push them past the Gators. The Gators were led by running backs Malik Davis and Lamical Perine, who accumulated a combined 151 yards and a touchdown. Barring a major Georgia meltdown, this loss essentially knocked the Gators from a third straight opportunity to compete for an SEC championship.

Alabama continued their national dominance as they defeated Arkansas 41-9. Damien Harris, Najee Harris, and Jalen Hurts combined to rush for 199 yards and four touchdowns. The Crimson Tide raced out to a 17-0 lead after the first quarter, and didn’t look back from there. The Razorbacks couldn’t find any success in the running game, only mustering 27 total yards on the ground. Arkansas receivers gained 200 yards in the air, but quarterback Cole Kelley only completed 23 of his 42 attempts (54.8%). Alabama has not lost an SEC game since losing to Ole Miss in Week 3 of the 2015 season.

South Carolina continued their impressive season by defeating Tennessee 15-9. The Gamecocks dominated on the ground by accumulating 194 yards and a touchdown. They also held Tennessee to 3.1 yards per carry on 39 attempts. Each kicker made all three of their attempted field goals, but Tennessee couldn’t put any more points on the board. The Volunteers are having yet another disappointing season, while the Gamecocks look to improve their winning streak to three against Vanderbilt next week.

Alabama and Georgia are clearly the two dominant forces in the conference this year, and look primed to face off in Atlanta for the SEC Championship Game. The rest of the conference looks relatively underwhelming, even though Auburn, LSU, Texas A&M, and Florida all have the potential to take down the top dogs.

Previous NFL Preview: The 2-3 Tennessee Titans host the 2-3 Indianapolis Colts
Next Titans Move Into First-Place Tie After Monday Night Win Over The Colts