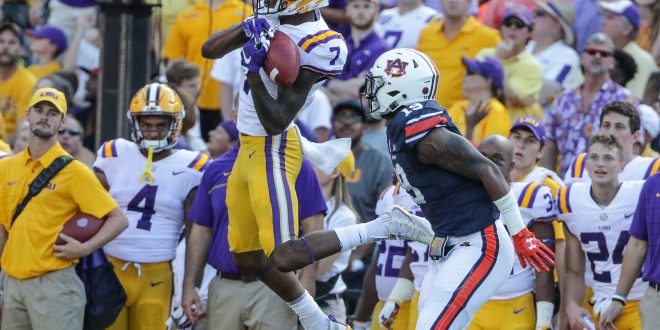 The LSU Tigers will be heading to Oxford, Mississippi this Saturday to take on Ole Miss in a rivalry game that both teams are hoping to win. No. 24 LSU heads into this game feeling confident and coming off of a big win last week against Auburn. They have an overall record of 5-2 and are 2-1 in the SEC. Ole Miss will also be coming off a win against Vanderbilt, but did lose to Auburn 44-23 the week before. They go into this game with a overall 3-3 record and 1-2 in conference play.

Ole Miss Head Coach Matt Luke is no stranger to LSU Head Coach Ed Orgeron. Coach Luke worked for him back in 2005 when Orgeron was the head coach of Ole Miss. This is the first time that Orgeron will go to Oxford as the opposing head coach.

But this isn’t a welcoming reunion for the old coach. Earlier this week, Orgeron was quoted saying, “the truth is the whole time I was there I was wishing I were here,” making this rivalry game a little more interesting for the two.

Will Ole Miss’s Efficient Passing Game Be Enough This Saturday?

The win against Vandy last week won’t have prepared this Ole Miss team to face another nationally-ranked opponent. It didn’t go well for them against their last two and this one might follow that pattern. A big key to this game for the Rebels is keeping their quarterback Shea Patterson hot. In his sophomore season alone, he has thrown for 2,143 yards and 17 touchdowns, completing nearly 66 percent of his passes. If Patterson can get past some of what the Tigers will bring on the defensive front, Ole Miss could get some points on Saturday.

However, Ole Miss has been having some defensive issues over the past few games. They forced two turnovers and had seven sacks in the Vandy game, but could end up being outplayed by LSU’s offense. Coach Luke said in the SEC teleconference Wednesday that LSU’s defensive backs are really talented compared to other secondaries he has seen over the season.

The Tigers have some real power players on their side that really do make them a threat for the Rebels this Saturday. LSU wide receiver D.J. Chark had an amazing game last week, catching a total of 5 passes for 150 yards. The senior’s 75-yard punt return touchdown was one of the biggest plays from the Auburn game last Saturday and puts him up their as one of the best receivers in college football.

Coupled with quarterback Danny Etling, who hasn’t been consistent this season, passed 13 for for 206 yards and one touchdown over Auburn. For success in this game, Etling will have to find Chark open.

Another weapon for LSU is linebacker Devin White who seems to be covering the entirety of the field for the defense. Last game, White had a career-high 15 tackles and has a total of 77 tackles for the season. Coach Orergon said in the SEC teleconference Wednesday that he’s an all around great player for the team.

Courtney Mims is a junior telecommunications major at the University of Florida. She enjoys covering all Gator sports and drinking gallons of Starbucks coffee while doing so.
Previous Ackerman&Matthews Tour
Next NFL Preview: AFC South Battle between Jags and Colts