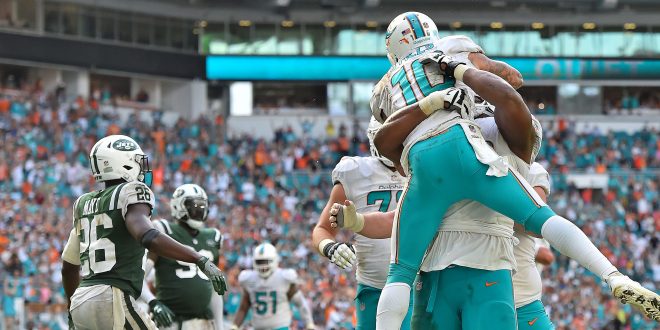 QB Moore Led the Dolphins to Victory Over the Jets

The Miami Dolphins defeated the New York Jets 31-28 on Sunday at the Hard Rock Stadium in Miami. It was another comeback win for the Dolphins as they erased a 14-point fourth quarter deficit to beat the Jets. This is the Dolphins second consecutive comeback win, as they overcame a 17-point deficit last week to defeat the Atlanta Falcons. Miami avenged their loss to the Jets in Week 3 after being defeating 20-6.

Quarterback Troubles to a Rallying Win

Dolphins starting quarterback Jay Cutler was taken out of the game early in the third quarter due to a chest injury. According to ESPN, the Dolphins believe Cutler is suffering from two cracked ribs and could be on the sidelines for a couple weeks. Cutler was escorted to the sidelines and then to the locker room after taking a hit from Jets linebacker Jordan Jenkins. Dolphins Head Coach Adam Gase says Cutler will taken to get MRI’s done.

The Dolphins were losing 21-14 when Cutler was taken out and replaced by back-up Matt Moore, who won the game for the Dolphins. The Jets soon added another touchdown to the board, giving them a two touchdown lead. However, Moore tied the game in the fourth quarter. He threw two touchdown passes to Kenny Stills, one for 28 yards and one for 3.

While Jet’s quarterback Josh McCown threw for 209 yards and had three touchdowns, his one interception in the fourth quarter led to Miami’s victory. With 47 seconds left in the game, McCown’s pass intended for Jermaine Kearse was intercepted by Miami’s Bobby McCain on the Jets 27. This interception led the Dolphins to kick a 39-yard field goal, giving them the win.

The Dolphins are now 4-2 overall after their week 7 victory. They will look to improve this record on the road this week. They play the Baltimore Ravens on Thursday, October 26. Matt Moore is now expected to start. Kickoff is set for 8:25 p.m. and you can find coverage of the game on CBS.

Sydney is a senior studying telecommunications with a specialization in sports media at the University of Florida. She is a multimedia sports reporter for ESPN 98.1 FM/850 AM WRUF and WUFT-TV.
Previous Jags shut out Colts with 27-0
Next Gators Football: Coach McElwain addresses death threats