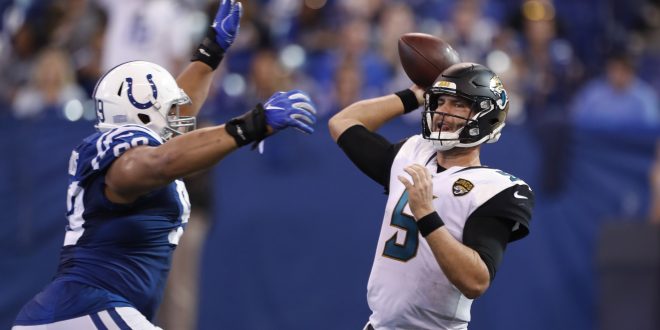 Jacksonville quarterback Blake Bortles completed 18 of his 26 passes for a season-high 330 yards as the Jaguars beat the Indianapolis Colts 27-0 on the road on Sunday.

The Jags had to play without the leading rusher Leonard Fournette who was inactive because of a sprained right ankle. But even without Fournette the Colts could not stop the Jaguars offense. Chris Ivory and Mercedes Lewis each scored a touchdown in the first quarter.

Two field goals of kicker Josh Lambo gave the Jags a 20-0 halftime-lead. The 282 passing-yards by Blake Bortles in the first half are a franchise record.

The last scoring play of the day was a 58-yard run into the end zone by running back T.J. Yeldon in the third quarter.

No Fournette? No problem.

Blake Bortles was very happy about the versatile Jaguars offense:

The defense also stepped up and matched the single-game franchise record for sacks (10). Jacksonville outscored the Colts with 528-232 yards in total as Indianapolis did not have any answers to the strong overall performance of the Jags. The game was never even close. The Colts lost their second straight game and are now 2-5. It was their first shutout since 2003.

Indianapolis coach Chuck Pagano clearly was not happy with the performance of his team: “It was not much of anything that we did well today and that falls on me. It goes back to preparation and execution. This is a tough one. They had ten sacks, I think we gave up. We could not stop them, there is a lot to fix obviously”, Pagano said.

The Jacksonville Jaguars host the Cincinnati Bengals on November 5 after getting a bye next week.

Jaguars coach Doug Marrone thinks the bye week will help his team to prepare for the upcoming matches: