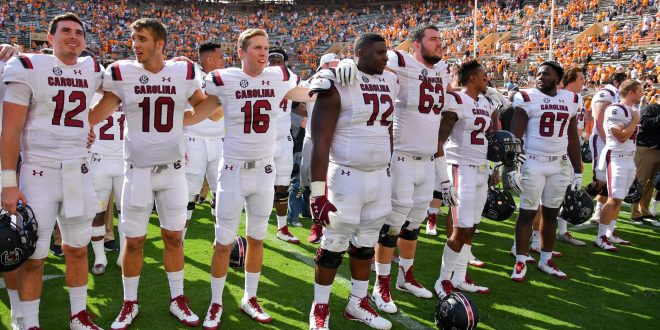 This Saturday, the Vanderbilt Commodores will travel to Columbia, South Carolina to take on the Gamecocks. Vanderbilt started off their season strong, but a shutout from Alabama started a four game losing streak for them. Some experts agree that this game will result in the Commodores continuing their losing streak. South Carolina has had a stronger season, with only two losses so far.

Vanderbilt looked good in the beginning of the season, but they lost their momentum after the Alabama loss. In order to get their season back on track, it is crucial that they fix things now and win this game against South Carolina. Commodore head football coach Derek Mason feels as if the recent bye week has given the team the time they needed to fix their mistakes and get back to winning.

They are currently ranked last in the SEC for rushing yards. Their strongest player has been quarterback Kyle Shurmur, who is ranked 7th in the SEC in passing yards and has 14 touchdowns for this season.

As for the Gamecocks, they have a better track record for this season thus far. They are only one game away from bowl eligibility for the season. Coming off a win against Tennessee could give them the confidence they need to win the game. Despite enduring injuries from several key players, South Carolina head coach Will Muschamp was confident in his team’s ability to use other players to continue the season.

If the Gamecocks can finish the game with little to no mistakes, they will probably take home the win. Vanderbilt’s defensive struggles and lack of scoring gives South Carolina the chance to win, as long as the Commodores keep up with what they have shown the past few games. After a 51 to 35 victory over Ole Miss on Saturday, Florida Gators head coach …