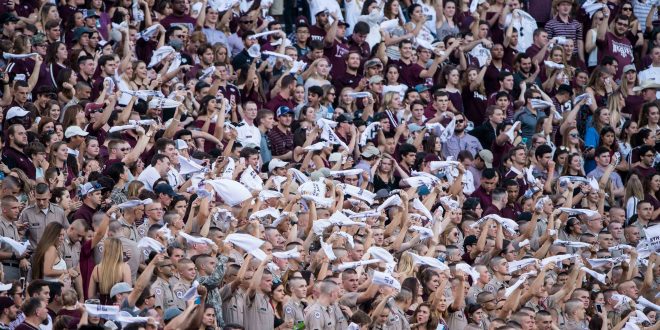 Sep 30, 2017; College Station, TX, USA; A view of the fans during the game between the Texas A&M Aggies and the South Carolina Gamecocks at Kyle Field. The Aggies defeat the Gamecocks 24-17. Mandatory Credit: Jerome Miron-USA TODAY Sports

Saturday night, Dan Mullen and Mississippi State enter the belly of the beast at Kyle Field to play the Texas A&M Aggies.

In 2015, Mississippi State strolled into College Station as the No. 21 team in the country with Dak Prescott at the helm for a matchup with the No. 14 Aggies led by sophomore Kyle Allen. Now, both teams are unranked with Allen now playing at Houston and Prescott leading America’s Team.

Dak Prescott was held to under 250 yards, gained 96 yards rushing and his only score came on the ground. Meanwhile, Allen threw all over the Bulldogs and Tra Carson ran wild as the Aggies took the win 30-17.

That Was Then, This Is Now

The Bulldogs have another dynamic quarterback in junior Nick Fitzgerald who is averaging close 250 yards of total offense. He’s coming off a performance last Saturday where he ran for 115 yards and 2 scores while throwing for 150 yards and a touchdown in a 45-7 rout of Kentucky.

He.
Could.
Go.
All.
The.
Way.@HailStateFB's Nick Fitzgerald TO THE HOUSE! pic.twitter.com/C5BsyErxIe

However, Texas A&M has a dual-threat quarterback of their own in freshman Kellen Mond. He has run the ball almost as much as Fitzgerald, but trails in total yards per game (220). He didn’t put up any stats last weekend as the Aggies were on a bye, but was effective in spots running and throwing in A&M’s win over the Gators in Gainesville.

Texas A&M has three players ranked among the top 5 in the SEC in sacks:

The Bulldogs seem to have a more accomplished defense statistically, as they rank toward the top in several categories:

They have an edge rusher in Montez Sweat who played like a man possessed against Kentucky. His performance earned him recognition over the week.

What This Means For Both Teams

A win for MSU would put them ahead of the Aggies in the SEC West standings (fourth). An A&M win would give them momentum going into a noon matchup at home against the Auburn Tigers next week.