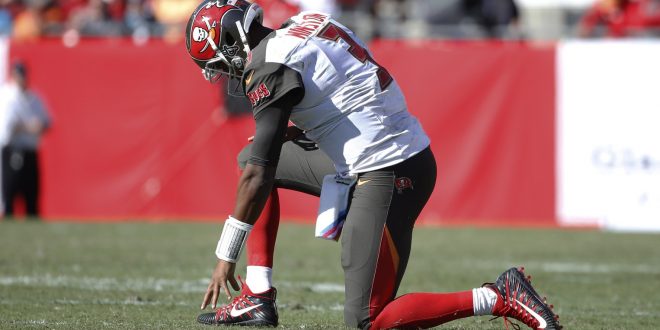 Oct 29, 2017; Tampa, FL, USA; Tampa Bay Buccaneers quarterback Jameis Winston (3) is slow getting up after he was pressured and made an incomplete pass against the Carolina Panthers during the second half at Raymond James Stadium. Mandatory Credit: Kim Klement-USA TODAY Sports

After their first regular season game, the future of the Tampa Bay Buccaneers looked bright. But, after week 9, the Bucs are finding themselves in a very similar situation. Last night, the team fell 17-3 at the paws of the Carolina Panthers. Normally, a loss to a 5-3 team would not be disappointing. But, for a team desperate to break a “bad” stigma, a fourth consecutive loss is not a good look.

Before yesterday, the Bucs were 2-4 after losing three close games, including two on the road. But, against the Panthers, Tampa Bay was back at home, where they had a 2-1 record. Media outlets even gave them the winning edge over the Panthers and their stronger record.

The beginning of the game started nicely. Some hard tackles here, some good runs there, etc. Carolina’s Cam Newton threw more complete passes than Tampa Bay’s Jameis Winston, but the first quarter was scoreless. Well, up until the end, when Carolina scored a touchdown.

The second quarter was messy as well. No touchdowns, but a Panthers field goal brought the score to 10-0 at halftime. At the end of the third, the Bucs were one field goal up. Salvageable.

However, the fourth quarter was a disaster for Tampa Bay. Winston threw two interceptions and a flurry of incomplete passes. Defensively, another Carolina touchdown was allowed. 17-3, Bucs lose their fourth consecutive game.

The Tampa Bay Bucs won the 2002 Super Bowl. Since then, they’ve failed to make the playoffs. But, there’s not really a reason why. In the past 15 years, the Bucs were able to draft in the first round 13 times.  Every year, a new savior is set to salvage the season. But, every year, expectations fall short.

The race between the Bucs and Raiders for the league's most disappointing team is the most compelling competition in the NFL.

The 2017 draft brought in O.J Howard, a tight end out of Alabama, with the 19th overall pick. And Howard has done a good job in his first pro season. However, tight end is not a productive enough position to help an ailing team. Especially when the quarterback needs help.

Jameis Winston was drafted first overall in 2015 to turn the Bucs around. Last year, he was able to lead the team near the playoffs. But, this year was supposed to be the year he finally did it. However, Winston’s posted ten touchdowns and six interceptions this year. That, combined with 5 losses, will not be enough to take the team past the regular season. To be fair, Winston is dealing with a shoulder injury. He left the Cardinals game, but was back in against the Bills and the Panthers. Before those games, he scored seven touchdowns and threw just three interceptions. Winston himself admitted his performance against Carolina was lackluster. But, will next week’s performance be any different?

Next week, the Bucs take on the New Orleans Saints. The Saints lead the AFC South with 5 wins and 2 losses. Tampa Bay cannot afford a fifth consecutive loss. But, from the looks of things, this year’s Bucs are no different than any other years.