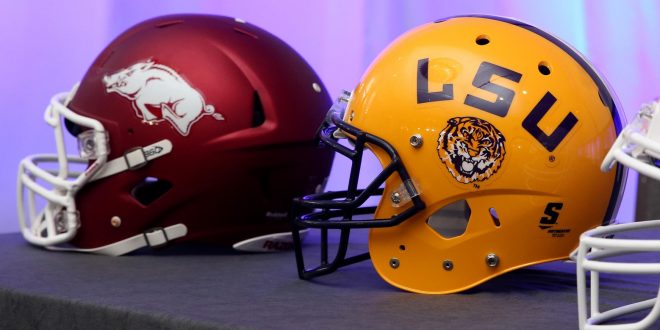 While the SEC West is currently a two-team race between Alabama and Auburn, culminating in the Iron Bowl, there are still other games to be played. Arkansas and LSU will square off at Tiger Stadium on Saturday at Noon on ESPN. The Hogs are 4-5 on the year, but have won their past two games. That being said, the Razorbacks beat 4-5 Ole Miss by one point and 1-8 Coastal Carolina by the same score at home. The 24th-ranked, 6-3 LSU Tigers lost their most recent game to Alabama by 14. While nobody expected the Tigers to beat ‘Bama, they hung close and showed that they can compete with the SEC’s best. Before that game, LSU won their previous three games against Florida, Auburn and Ole Miss.

LSU comes into the game as a 17-point favorite, per Westgate Las Vegas SuperBook, and have an 88.2% chance to win the contest, per ESPN’s Football Power Index. The winner of Saturday’s game will receive the Golden Boot, a tradition that began in 1996. While the two teams played their first game in 1901, the Golden Boot was introduced over 90 years later. As seen below, if you combined the states of Arkansas and Louisiana, it would look like a boot.

Where does 'The Golden Boot' rank amongst the best rivalry trophies? #LSU #7DaysofFight https://t.co/34Qug48CIE pic.twitter.com/a7FoxBeMhw

LSU Keys To The Game

Arkansas Keys To The Game

Depth chart for the Battle for the Golden Boot ⤵️https://t.co/k570nhvMhg

Bielema on not trying to trick the other team with his 2QB system.

Bielema goes further in depth on the battle between his two quarterbacks for the starting job.

Bielema on what Arkansas has to do to win on Saturday.

Bielema on preparing for the LSU Tigers.

Bielema on the rivalry between LSU and Arkansas.

Orgeron on the physicality of his team and how they played vs. Alabama last week.

Orgeron on fixing what his team did wrong vs. Alabama and what he’s doing to geu ready for Arkansas.

Orgeron on putting together defensive gameplans for both of Arkansas’ possible starting quarterbacks.

Orgeron on preparing for the Razorbacks as a whole.

Saturday’s game kicks off at 12 p.m. and can be seen on ESPN with Jason Benetti, Kelly Stouffer and Julie Stewart-Binks on the call.

We all know about the Big Ten and SEC football divisions, but how do they …