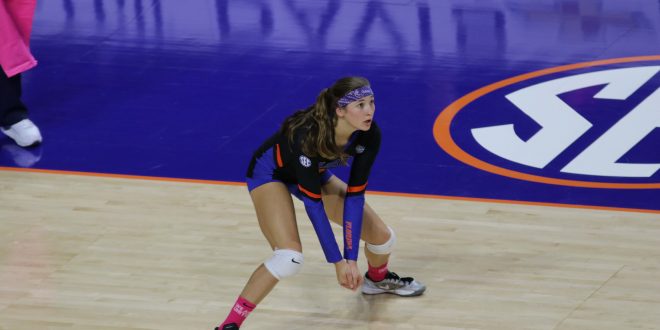 Wednesday’s match-up has a lot at stake for Florida as they currently have a half-game lead in front of Kentucky in the SEC standings. `The third ranked Gators should come into this one with a lot of confidence as they are in the midst of an eight game winning streak.

Over the course of Mary Wise’s tenure at Florida, it is fair to say the head coach has had a lot of success against the Aggies. Wise currently holds a 13-1 record against Texas A&M. That one loss came in a five set loss in College Station, so the Aggies have stunned Florida before.

One interesting trend in the series to keep in mind, during tonight’s match, is the amount of sets the two teams play. Florida has been able to get the job done quickly in 2017, however nine of the 14 matches have gone at least four sets.

Wednesday’s match will be the second time the Gators see the Aggies this year. Florida defeated Texas A&M at home on October 4th in four sets.

Texas A&M is in the middle of a four-game losing streak. The Aggies have only won three sets in their last four matches.

In their last time out, the Aggies actually won their first set but then proceeded to drop the next three on the road to Ole Miss. The players to watch for tonight are Kiara McGee and Hollan Hans. They both led Texas A&M in scoring in the October showdown with the Gators with 10 and 13 points respectively.

In what has seemed like an avalanche of honors this season, another Gator has been given an honor. Senior Shainah Joseph was named Co-SEC Player of The Week on Monday afternoon.

This past week, Joseph really flexed her muscles as she she collected 28 kills with a .431 hit percentage. Her most noticeable performance came on Senior day as she scored 21.5 points including 20 kills, both were career highs.